9 November 2012
The practice of enforced disappearances perseveres in many countries, a group of independent United Nations experts warned today, following their review of more than 400 cases spanning 31 nations.

At the conclusion of its 98th session held in Geneva, the Working Group on Enforced or Involuntary Disappearances expressed their “deepest concern” that 20 years since the adoption of the Declaration on the Protection of All Persons from Enforced Disappearance, the practice of vanishing people was still continuing unabated around the world.

“Enforced disappearances continue to occur in many countries, often in a persistent manner,” the UN experts said in a news release.

The Declaration was adopted by the UN General Assembly in 1992. Among its articles, it states that “any act of enforced disappearance is an offence to human dignity,” and it condemns such actions “as a grave and flagrant violation of the human rights and fundamental freedoms proclaimed in the Universal Declaration of Human Rights.”

In their news release, the experts also drew attention to a two-day event which opened their annual session on October 30th and was devoted to the impact of enforced disappearances on women, as well as on the role of women as actors of change.

In addition, they underlined their session’s focus on the issue of reparations, methods of work, past and potential country visits, and specific country situations, particularly in the context of obstacles encountered in the implementation of the Declaration.

The UN experts also finalized and approved their 2012 annual report which will be presented at the Human Rights Council’s 22nd session in March 2013. 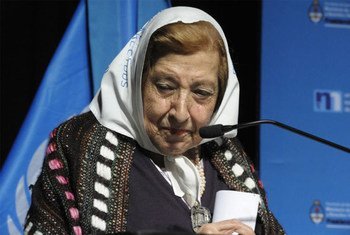 30 August 2012
The practice of enforced disappearances in which citizens of a State are deliberately vanished to never be seen again is not only a heinous crime but an act that negates the very essence of humanity, a group of independent United Nations experts said today.