Addressing the General Assembly today, a senior United Nations official today called for a “just solution” to the plight of the five million Palestine refugees.

The Commissioner-General of the UN Relief and Works Agency for Palestine Refugees in the Near East (UNRWA), Filippo Grandi, also expressed “extreme concern” that most of the 518,000 Palestine refugees in Syria were now directly caught up in the conflict and called for greater protection for civilians in the country.

A significant number of Palestinian refugees, as well as Syrians, “had been killed, injured and compelled to leave their homes,” he noted, while also paying tribute to five Palestinian UNRWA staff members killed in Syria – the latest a female teacher killed on Monday in the capital, Damascus.

UNRWA, in a news release, noted that the losses in Syria reflected the vulnerability of the half million Palestinian refugees in the country, and in the region in general.

“The loss of our staff – Palestine refugees themselves – brings home to us in the starkest terms the human dimension of the Palestine refugee question,” Mr. Grandi said in his presentation to the Assembly’s so-called Fourth Committee, which deals with a variety of political subjects, including the issue of Palestinian refugees.

In addition to the conflict in Syria, noted the UN official, Palestinian refugees have been affected by an Israeli blockade of Gaza, with UNRWA struggling to provide food assistance to almost 800,000 vulnerable refugees there.

In the West Bank, where refugees are almost 30 per cent of the total population, Mr. Grandi cited continued settlement expansion, settler violence, land expropriation, building prohibitions, increased demolitions, movement restrictions and the asphyxiation of traditional herding as “a gradual erosion of space and rights for Palestine refugees and indeed for all Palestinians… a cause of unbearable hardship for countless people, and a major obstacle to peace.”

The Commissioner-General condemned a “lack of real action” to halt rights violations in the West Bank.

He added, “Public statements are made condemning settlement expansion and other violations of international law, but without political determination to stop it, the colonizing enterprise, which the United Nations and the international community clearly consider illegal, will move forward inexorably, with impunity, and with potentially dangerous consequences.’

In his remarks, the Commissioner-General also highlighted that despite political developments in the region – such as the Arab Spring – Palestinians, and Palestinian refugees in particular – remain sidelined, while the agency’s efforts to provide assistance and protection for the five million refugees scattered throughout the Middle East “was not becoming any easier.”

He highlighted two key challenges to it carrying out its mandated tasks: the scarcity of funds and the prevalence of conflict.

UNRWA was chronically underfunded, he said – with only 41 per cent of its emergency appeal met in 2011 – and subject to renewed political attacks.

While paying tribute to the generosity of UNRWA’s main group of donors, the Commissioner-General also underlined that the agency’s budget supporting its education, health, relief, protection and social services is in a perilous state, while refugee needs have grown and costs have increased.

With that in mind, the UN official urgently appealed for funding from countries in Asia, Latin America and the Middle East, where economic growth was increasingly matched by a more assertive political role.

“UNRWA – neither the cause, nor the solution to the question of refugees, but the only tangible support felt by many of them – is more necessary than ever”, said Mr. Grandi. “Give us your backing, so that together we can ensure that Palestine refugees lead productive lives, while the political dimensions of the Palestinian-Israeli conflict are addressed in a comprehensive and just manner.”

Wrapping up his presentation, the Commissioner-General also flagged the need for support from the international community, warning that the frustration, marginalization and “collective hopelessness” felt among Palestinians today could have disastrous consequences if continually ignored.

“Palestine refugees may be a political question, but they are first and foremost people – ordinary men and women who rightly insist on not being discarded and forgotten about as the flotsam and jetsam of history,” he added. 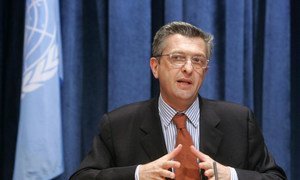 The European Commission will contribute 11 million euros (about $14.3 million) to support the work of the United Nations assisting Palestinian refugees in Syria, Lebanon and the occupied Palestinian territory, the UN agency charged with these tasks said today.