The United Nations food relief agency today said it has begun distributing food for over 27,000 people in all the townships affected by recent inter-communal violence over the past month in Myanmar’s Rakhine state.

Addressing reporters in Geneva, a spokesperson for the UN World Food Programme (WFP), Elisabeth Byrs, said the agency expects to reach 35,000 displaced people by midweek, and, wherever possible, it will deliver food directly into the hands of refugee camp committees.

Ms. Byrs added that all food supplies have been dispatched predominantly by boat, as this was the most practical way of reaching most of the affected populations. At least 12 separate boatloads have been completed, and, in places with shallow waters, WFP has used several smaller boats to reach the displaced.

At least 89 people have been killed and 35,000 displaced since the upsurge of inter-communal violence a fortnight ago, and more than 5,300 houses and religious buildings have been destroyed, according to UN estimates.

The violence first began in June, when clashes between ethnic Rakhine Buddhists and Rohingya Muslims led to the Government declaring a state of emergency in the state. The violence reportedly left at least a dozen civilians dead and hundreds of homes destroyed, while internally displacing some 75,000 people.

At the news briefing, Ms. Byrs also noted that WFP urgently requires $11 million to cover the food needs of 100,000 displaced people for the next six months, as well as to ensure food can be purchased now and delivered in time.

Without a strong, immediate donor response, WFP would be forced to start cutting rations to the displaced by December, she stressed, adding that the agency will continue to work closely with the Myanmar authorities and local governments to ensure access to the most vulnerable populations. 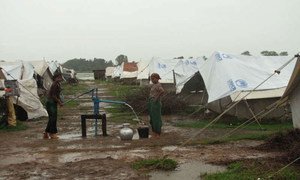 The security situation in Myanmar's Rakhine province is still tense after a recent wave of violence which began in October, the United Nations humanitarian agency said today, adding that more than 110,000 displaced people are in urgent need of food, shelter and health care assistance.