A camp for internally displaced people from the earlier wave of violence that shook Myanmar's Rakhine state. UNHCR Myanmar

5 November 2012
The security situation in Myanmar's Rakhine province is still tense after a recent wave of violence which began in October, the United Nations humanitarian agency said today, adding that more than 110,000 displaced people are in urgent need of food, shelter and health care assistance.

“The situation is still very, very volatile, it's very tense,” a spokesperson for the UN Office for the Coordination of Humanitarian Affairs (OCHA), Jens Laerke, said in an interview with UN Radio. “The Government is doing its very best to keep the situation under control, but it's still very fragile.”

At least 89 people have been killed and 35,000 displaced since the upsurge of inter-communal violence a couple of weeks ago, and more than 5,300 houses and religious buildings have been destroyed, according to OCHA.

The first wave of violence occurred in June, when clashes between ethnic Rakhine Buddhists and Rohingya Muslims led to the Government declaring a state of emergency in the state. The violence reportedly left at least a dozen civilians dead and hundreds of homes destroyed, while internally displacing some 75,000 people.

“The first displacement was rather localized, in a town called Sittwe, but now we have seen more and more displacement across the state,” Mr. Laerke said.

OCHA is calling on Myanmar authorities to grant full access to Rakhine as the number of displaced continues to increase and spreads out to the entire province, the spokesperson noted. “What we know from the preliminary findings is that they need food, shelter and other basic necessities,” he said.

Earlier last week, the Office of the UN High Commissioner for Refugees (UNHCR) visited several villages, where medical staff in the assessment teams treated many of the wounded. The agency has also sent basic supplies such as food, plastic sheets, blankets and mosquito nets.

In addition, OCHA has launched an appeal of $32.5 million to assist those displaced. So far, only half of it the sought-after funds have been received.

In late October, in the presentation of a report on his work to the General Assembly, UN Special Rapporteur on the human rights situation in Myanmar, Tomás Ojea Quintana, called for the underlying causes of the tension and conflict between Rakhine's Buddhist and Muslim communities to be addressed as a priority.

Independent experts, or special rapporteurs like Mr. Ojea Quintana, are appointed, in an honorary capacity, by the Geneva-based UN Human Rights Council to examine and report back on a country situation or a specific human rights theme. 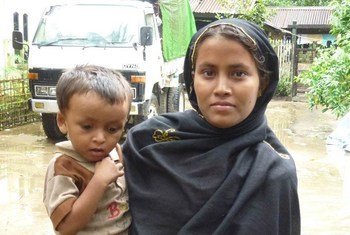 2 November 2012
The United Nations refugee agency has called for an immediate return to calm in western Myanmar’s Rakhine state, where ongoing inter-communal violence has uprooted more than 35,000 people.