Following a meeting with Lebanon’s former President Amine Gemayel, a senior United Nations official said the importance of political dialogue in the wake of a deadly bombing in the Lebanese capital of Beirut last week formed a central part of the pair’s discussion.

“I believe we all agree on the importance of the consultations leading to an outcome that satisfies all sides,” the UN Special Coordinator for Lebanon, Derek Plumbly, added as he described to journalists how he and Mr. Gemayel, the leader of Lebanon’s Kataeb Party, had discussed the political situation in Lebanon, and the steps Lebanese President Michel Sleiman has taken to consult with Lebanon’s political leaders with regards to the way ahead.

Last Friday’s attack comes amidst fears that the conflict in neighbouring Syria, where more than 20,000 people, mostly civilians, have died since an uprising against the Syrian President Bashar al-Assad began last year, could spill over into Lebanon and exacerbate the delicate sectarian balance already existing in the country.

In his remarks to the media, Mr. Plumbly also said one of the topics discussed in his meeting with Mr. Gemayel was the statement he and representatives of the five permanent members of the UN Security Council issued Monday after they met with President Sleiman.

The statement condemned Friday’s bomb attack, which took place in Beirut’s mainly Christian district of Ashrafiya, and killed General Wissam al-Hassan, a senior commander in the Lebanese Internal Security Forces. A number of other people were reportedly also killed or wounded in the attack.

“We reiterated our condemnation of this incident and the determination of the Security Council on the importance of bringing those responsible for this crime, and their sponsors, to justice,” Mr. Plumbly said, adding that “this was one point of focus” in his meeting with Mr. Gemayel.

Asked by a reporter, following the meeting, whether he believed there should be a government of national unity in Lebanon, Mr. Plumbly said the UN’s “first concern” for the Middle Eastern country was “stability to the highest extent possible.”

“I believe this is a Lebanese political process and the outcome of the consultations will, I hope, be a Lebanese one that satisfies all sides,” he added of the ongoing dialogue.

“At the same time,” he noted, “the second part of our statement was on the importance of continuity of Lebanese constitutional and governmental institutions during this period because Lebanon is subjected at this time to dangers that are not only internal, but also regional.” 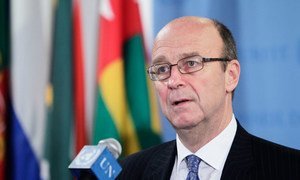 In a meeting with Lebanon’s President Michel Sleiman, a senior United Nations official and representatives of the five permanent members of the Security Council today expressed their support for the Middle Eastern nation and its stability in the wake of the deadly bombing which struck central Beirut on Friday.