24 October 2012
The United Nations top political official in Somalia today called for an investigation into the attacks that targeted two journalists in the Horn of Africa country over the past week, stressing that the perpetrators must be brought to justice.

“I condemn these horrific attacks in the strongest terms. Trying to silence the media will have a devastating effect on the nation’s vibrant media community,” said the Secretary-General’s Special Representative for Somalia, Augustine P. Mahiga. “These attacks must stop and the crimes must be fully investigated by the Somali and Somaliland authorities.”

On Tuesday, Ahmed Saakin Farah Ilyas, a correspondent with Universal TV was shot dead in the town of Las-Anod in Somalia’s Sool region. Two days earlier, Mohamed Mohamud Tuuryare, a journalist working for the Shabelle media network in the capital, Mogadishu, was shot and is still in a critical condition, the UN Political Office for Somalia (UNPOS), which Mr. Mahiga heads, said in a news release.

“I send my deepest condolences to the family and friends of Ahmed Farah Ilyas and I wish Mr. Mohamed Tuurayare a quick and full recovery,” Mr. Mahiga said.

According to the UN, Somalia is one of the most dangerous places in the world for journalists to operate, with 2012 being one of the bloodiest years on record for the country’s media industry.

Sixteen Somali journalists have been killed this year alone and more than 20 reportedly injured.

The UN has repeatedly called on the Somali authorities to conduct independent and swift investigations into the killings and to bring and end to the cycle of violence and to impunity.

“I call on the authorities to bolster their criminal investigation capacity and bring the perpetrators to justice. UNPOS stands ready to assist in this regard,” Mr. Mahiga added.

After decades of factional fighting and lawlessness, the East Africa country has been undergoing a peace and national reconciliation process, with a series of landmark steps in recent months that have helped to bring an end to the country’s eight-year political transition period. These steps included the adoption of a Provisional Constitution, the establishment of a new Parliament and the appointments of a new President and a new Prime Minister.

Until last year, most of the capital, Mogadishu, was, for several years, riven by a fluid frontline dividing the two sides – fighters belonging to the Al Shabaab militant group and troops belonging to the Government of Somalia, with the latter supported by the UN-backed African Union Mission in Somalia (AMISOM).

Since the Al Shabaab withdrawal from the capital in August last year, the frontlines have been pushed back to surrounding areas. However, the use of roadside bombs, grenades and suicide bombers still take place, as do armed clashes.

In September, Al-Shabaab insurgents withdrew from the port city of Kismayo, their last remaining stronghold located a sizable urban area, but still control parts of the country’s south-central areas. 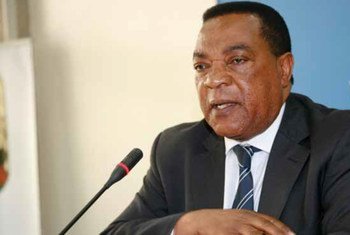 28 September 2012
The top United Nations political official for Somalia today said he was shocked and alarmed by the killing of seven journalists in the capital, Mogadishu, over the past month.