9 October 2012
Secretary-General Ban Ki-moon today welcomed a new global initiative launched by the French Government to curb the use of the death penalty around the world.

In a video message for the French Foreign Ministry’s meeting on the death penalty, Mr. Ban applauded the French plan and expressed hope that it would help reinforce the emerging consensus on abolition.

“The message for abolition is heard across legal systems, traditions, customs and religious backgrounds. It is heard in all regions,” the Secretary-General stated.

According to the French Government, the aim of the campaign is to step up the action taken in recent years to raise awareness of the abolition of the death penalty ahead of the upcoming fifth World Congress against the Death Penalty, to be held in June 2013 in Madrid, Spain.

Mr. Ban emphasized that the application of capital punishment invariably entails cruel, inhuman and degrading treatment and is rarely meted out across society in an equitable manner.

“Application of the death penalty tends to be discriminatory,” he said. “The poor, the powerless and persons belonging to minority communities are executed in disproportionate numbers,” he added.

The overall global trend on the use of the death penalty has seen the number of executions worldwide decline. Nevertheless, there has been a recent spate of executions in Gambia as well as in Iraq, where 96 people have had their death sentences carried out since the beginning of 2012. During the month of August alone, 26 people have reportedly been executed by the Iraqi authorities, including 21 in a single day.

“People around the world have long demanded an end to the death penalty,” the Secretary-General stated.

“The United Nations stands with you in doing all that we can to end the death penalty.” 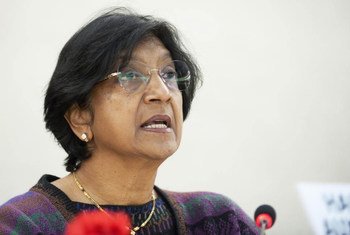 31 August 2012
The United Nations agency tasked with defending human rights voiced renewed concern today over the sudden spate of executions in countries around the world following the recent use of capital punishment in Gambia, Iraq, and South Sudan.