25 September 2014
The continuing application of capital punishment is a “primitive” practice which has no place in the 21st century, United Nations officials declared today, as they pressed global leaders to set course towards abolishing the death penalty and advancing a more progressive judicial agenda in their respective States.

“We are seeing substantial progress towards the universal abolition of the death penalty,” Deputy Secretary-General Jan Eliasson declared in his opening remarks at the high-level event, Moving Away from the Death Penalty: National Leadership, held on the margins of the annual General Assembly debate.

“The right to life represents everything the UN stands for,” he affirmed, adding that the application of the death penalty deprived people of their lives “arbitrarily and cruelly” and that the practice itself was “unjust and incompatible with human rights.”

Mr. Eliasson urged world leaders gathered at the event to make strides in bringing about either a moratorium or the abolishment of capital punishment in their respective nations. In addition, he called on all States to ratify the Second Optional Protocol to the International Covenant on Civil and Political Rights which seeks to abolish the death penalty across the globe.

“We call on you to show principled leadership on the matter of the death penalty,” he continued. “Depriving a person of his or her life is incompatible with life in the 21st century. Let us do away with the death penalty. In doing so we reaffirm faith in human life.”

The event also marked the release of a new publication produced by the Office of the High Commissioner for Human Rights (OHCHR), entitled Moving Away from the Death Penalty: Arguments, Trends and Perspectives, which places particular focus on the political leadership required to move away from capital punishment.

In his remarks to the event, High Commissioner for Human Rights Zeid Ra’ad Al Hussein underscored the need to reform judicial systems around the world, noting that only then would a practice based on vengeance truly be defeated.

“Revenge alone is not justice,” said the High Commissioner, who encouraged the international community to “set course” towards a “more sophisticated, more human” form of justice which goes beyond punishment and seeks “a genuine recognition by the wrongdoers of their wrongdoing.”

“As we work toward that objective, enabling contrition, we must continue to put an end to the application of the death penalty, which is the very example of human vengeance at its worst,” he declared.

The High Commissioner dismissed capital punishment as “degrading and cruel in more than one sense” and acknowledged that it was “often discriminatory” of the condemned, disproportionately affecting the poor, the mentally ill, the powerless and minorities.

But he admitted to being “impressed and heartened” by what he described as a “strong momentum” towards a global abolition of the practice.

Recently, Equatorial Guinea, Pakistan, and the states of Washington, Maryland and Connecticut in the United States decided to establish a moratorium or suspend executions while last April, El Salvador, Gabon and Poland acceded to the Second Optional Protocol. These countries join more than 160 other Members States who have already either eliminated capital punishment or do not practice it.

“These decisions to cease judicially sanctioned killings have been taken thanks to principled political leadership,” the High Commissioner confirmed, while urging those Member States that continue to apply the death penalty to liaise with his office and receive assistance on possible ways to abolish capital punishment.

“The death penalty is too severe a sanction in the hands of humans,” he concluded. “Surely, we cannot reach far into the 21st century, claim to be an ever more sophisticated humanity, and still be practicing it. Its application must now be suspended by all States.” 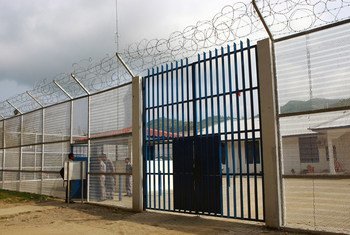 2 July 2014
The death penalty has no place in the 21st century, United Nations Secretary-General Ban Ki-moon declared today, calling on all States take concrete steps towards abolishing or no longer practicing this form of punishment.