Secretary-General Ban Ki-moon today called on the Syrian Government to take the initiative in declaring an immediate unilateral ceasefire, and on the opposition to then accede to it, in a renewed bid to end what he called a “regional catastrophe with global ramifications.”

“I have conveyed my strong message to the Syrian Government that they should immediately declare a unilateral ceasefire,” he told a news conference in Paris, after holding talks with French President François Hollande on the 19-month uprising against Syrian President Bashar al-Assad and his Government in which more than 20,000 people have already been killed.

“Of course their reaction was that, what would happen if they do it, because the opposition forces might continue. That is exactly what I have discussed, and I am in the process of discussing with the key Member States of the Security Council and the countries in the region,” he added, stressing that Joint UN-Arab League Special Representative Lakhdar Brahimi will continue to discuss this matter with regional leaders, including Mr. Assad.

“I am getting very positive support from the key countries. It is important that opposition forces are united in a more coherent way, and instead of pursuing a military option, I urge the opposition forces to agree to this unilateral ceasefire, when and if the Syrian Government declares it. That, I am going to continue to discuss so that it will happen.”

Mr. Ban noted that the Syrian people are divided into two and the Security Council has not been able to be united, while there are even differences on the crisis among countries in the region. “All these deadlocked situations must be broken,” he declared.

“At this time, I would urge again those countries who are providing arms to both sides should stop providing military equipment, and also further militarization will put the Syrian people only in a more miserable situation. This is not an option. The only option available is political resolution through political dialogue, led by the Syrian people.”

Mr. Ban and Mr. Hollande reviewed the “extremely dangerous” impact of the crisis, which has seen an escalation of the conflict on the Syrian-Turkish border and a flood of hundreds of thousands of refugees pouring into neighbouring countries.

As the fighting continued to rage today, a UN spokesperson voiced “extreme concern” at reports of the use of medical facilities and vehicles to carry out violence related to the conflict. According to media reports, an Islamist group said a suicide bomber drove an explosives-packed ambulance in an attack in the town of Harasta, northeast of Damascus, last night.

The spokesperson stressed that medical facilities, equipment and personnel must not be targeted or used for military purposes and that all parties involved in the conflict must respect international humanitarian law and ensure that civilians are not targeted.

In a related development, the UN Children’s Fund (UNICEF) announced today that it is expanding its operation within Syria and in countries affected by the crisis to cope with the growing needs of children and families as winter approaches, such as providing heating, children’s clothes and prefabricated classrooms. Next month it plans to support a vaccination campaign to protect up to 1 million children against measles and other diseases.

“There is a perception that things are so bad in Syria that nothing can be done and that is simply not the case,” UNICEF Executive Director Anthony Lake said in Jordan during a visit to the Za’atari refugee camp near the Syrian border.

“We have been on the ground before and throughout the crisis, we have already reached hundreds of thousands of children and there are now more opportunities in Syria to reach even more children than we have the resources to support,” he added, noting that the agency works with health and education officials, the Syrian Red Crescent and dozens of non-governmental organizations (NGOs) and local associations across Syria.

Around 1 million children are affected by the conflict inside Syria, and more than 100,000 Syrian children have been displaced to Lebanon, Jordan, Turkey and Iraq. UNICEF is urgently scaling up its emergency response to reach hundreds of thousands of children with child protection, water, sanitation and hygiene, health and nutrition, and education initiatives. But a lack of funds is inhibiting what can be achieved. UNICEF has appealed for $91 million for its operations.

In his talks with the French leader, as with Prime Minister Jean-Marc Ayrault and Foreign Minister Laurent Fabius whom he met last night, Mr. Ban also discussed the lack of progress in the peace process between Israel and the Palestinians, and highlighted his “profound sadness” at recent anti-Semitic incidents in France.

“The United Nations is adamantly opposed to all acts of religious hatred or intolerance,” he declared. “I am pleased to note that the French authorities have publicly stated their categorical rejection of all anti-Semitism and have announced measure to reinforce security.”

The Secretary-General also broached the issue of intolerance in a separate meeting with the executive board of the Paris-based UN Educational, Scientific and Cultural Organization (UNESCO). “In a globalized world, where images and words are transmitted at great speed, too many people use our differences as a pretext to stoke hatred of the other.

“We must resist the rise of ignorance and intolerance. Against extremism the moderate majority must speak out loud and clear, call for dialogue and show what each of us has that is universal.”

He stressed that education is a basic human right and recalled his own childhood during the Korean War when UNESCO, along with UNICEF, provided food, medicine and another kind of sustenance: textbooks. “To me and so many others, those school books were every bit as important for getting us through the dark days of the conflict, and then for building a brighter future,” he said. 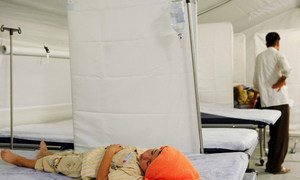 Amidst escalating tensions along the Syrian-Turkish border, United Nations Secretary-General Ban Ki-moon and the world body’s Security Council today called on all concerned to exercise restraint.