9 October 2012
A new global initiative ensuring the social protection of the world’s poorest people is a growing necessity, two United Nations independent experts said today, noting that without such a programme, chronic unemployment, food insecurity, and natural disasters would pose continuous impediments to those seeking to emerge from poverty.

In a joint news release, Magdalena Sepúlveda and Olivier De Schutter, the UN Special Rapporteurs on extreme poverty and the right to food, respectively, urged the creation of a Global Fund for Social Protection, stating that 2 per cent of the world’s gross domestic product (GDP) would be enough to provide all the world’s poor with basic social protection from the effects of unemployment, illness, disability, crop failure and soaring food costs.

The experts’ proposal comes on the heels of a new hunger report published today by the UN Food and Agriculture Organization (FAO), the International Fund for Agricultural Development (IFAD) and the World Food Programme (WFP), indicating that nearly 870 million people, or one in eight, were suffering from chronic undernourishment in the 2010-2012 biennium.

“Following this summer’s drought in the US, food prices are dangerously high for the third time in five years and hunger remains at unacceptably high levels, as today’s FAO figures show,” Ms. Sepúlveda and Mr. De Schutter stated.

“The right to food is denied every time prices spike and people are no longer able to put food on the table. Food and other basics must not be left to the mercy of economic cycles – the world’s poorest citizens must be able to fall back on basic social protection,” they added.

The experts noted that many developing countries struggle when faced with the surging expenditure on social protection required by the sudden onset of catastrophes such as droughts, floods, or disease epidemics and that the proposed fund would help close the funding shortfalls for the establishment of a social protection floor in least developed countries (LDCs) as well as underwrite schemes against the risks of excess demand triggered by major shocks.

In addition, they emphasized that the fund would be financed by contributions from developed countries and would either be housed within existing international agencies, such as the World Bank, or established as an independent body.

“International support for social protection measures becomes even more relevant in the context of the global economic crisis and its severe impact on the LDCs. International solidarity is needed,” the experts continued, pointing out that the fund would persevere with the UN’s mission to carry the anti-poverty targets known as the Millennium Development Goals (MDGs) beyond 2015.

“When the global financial crisis struck, governments stepped in to prop up banks that were deemed too important to fail,” they added. “The same logic must now be applied to basic social protection, which is too crucial to be denied.”

From stamps to e-services, UN postal agency adapts to the march of time 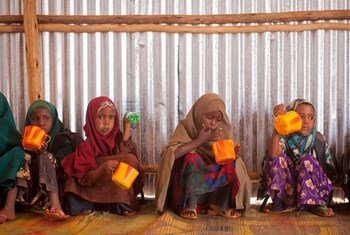