In his address to the United Nations General Assembly, the President of the General National Congress of Libya, Mohamed Yousef El-Magariaf, highlighted his country’s progress since the downfall of its former leader, Muammar al-Qadhafi, while also calling for the international community’s support in overcoming challenges it currently faces.

The North African country has been undergoing a democratic transition process, which includes the recent holding of national elections, the first free vote in decades in Libya, where Mr. al-Qadhafi ruled for more than 40 years until a pro-democracy uprising last year – similar to the protests in other countries in the Middle East and North Africa – led to civil war and the end of his regime.

Human rights, transitional justice, and national reconciliation are among the other issues that the country is currently dealing with; the past months have seen armed clashes between various groups, testing the reach and authority of the Government's security apparatus and ability to impose the rule of law. The integration or demobilization of the revolutionary fighters who took part in the uprising, and the control of weapons, are other issues the country faces.

In his statement to the 67th Assembly’s General Debate at UN Headquarters in New York, on Thursday, the Libyan leader apologized for the crimes carried out by Mr. al-Qadhafi, saying Libyans were determined to build a State of peace, security, good relations with their neighbours and respect for international obligations and human rights.

Furthermore, he called on all States to help Libya recover funds looted by the al-Qadhafi regime to finance terrorism abroad.

Referring to an anti-Islam video made in the United States and which recently led to violent reactions in various cities across the Middle East, North Africa and elsewhere, President El-Magariaf expressed deep sadness over the related violence in the eastern Libyan city of Benghazi, in which the United States Ambassador to Libya, Christopher Stevens, and others, were killed.

He hailed the US diplomat as the “voice of reason and conscience” and “the messenger of peace,” vowing that the tragedy would strengthen Libya’s solidarity and unity around the aspirations and goals that he had stood for.

“We will defeat the schemes of retarded terrorists who do not represent Libya, nor represent Islam,” he said assuring the US that Libya would pursue the perpetrators and bring them to justice.

The Libyan Government would spare no effort to bolster protection for diplomatic and consular missions, he added, while also condemning the video.

Other topics touched upon in his speech to the Assembly included the need for a nuclear weapon-free zone in the Middle East, Israel’s withdrawal from the occupied Palestinian territory, an independent State of Palestine and the crisis in Syria.

The Syrian crisis also featured in the speech of Tunisia’s President Moncef Marzouki to the General Debate on Thursday. “Dictatorship is a disease” which impacts upon freedom and gives rise to hatred and violence, he told the gathering.

In early 2011, the country witnessed a popular uprising – the first of many across North Africa and the Middle East calling for democratic reforms – that removed the long-standing regime of Zine El Abidine Ben Ali.

Since then, the North African nation has been engaged in democratic transition process, which included the holding of peaceful elections in October 2011 that led to the establishment of a Constituent Assembly.

Describing his country’s experience, President Marzouki said Tunisia had worked under the auspices of the United Nations to establish peace and avoid confrontation. But, he noted, the freedom and democracy that people now enjoyed had come at a high cost: tens of thousands of people held as political prisoners, with hundreds of people killed and injured.

The President invited the United Nations to declare dictatorships a social and political “scourge,” to be eliminated by a bold programme similar to that which had eradicated polio and small pox.

In that context, he said the International Criminal Court (ICC) – the first permanent international court set up to prosecute individuals for genocide, crimes against humanity, war crimes and the crime of aggression – only tackled crimes after they had been committed, and mechanisms to prevent dictatorships from taking root were needed.

Indeed, dictatorships gave themselves a “false legality” by organizing fraudulent elections and using democratic principles to undermine democracy itself, the President said. He proposed the creation of an international constitutional court, similar to the ICC, to denounce certain constitutions, or illegal charters and elections.

In his statement, like Libya’s Yousef El-Magariaf, President Marzouki also touched upon the issue of Palestine, a nuclear weapon-free Middle East, Islamophobia and the need to reduce the chasm between rich and poor.

The two North African leaders are among scores of world leaders and other high-level officials presenting their views and comments on issues of individual national and international relevance at the Assembly’s General Debate, which ends on 1 October. 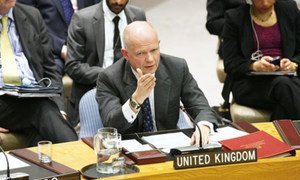 The Security Council today highlighted the dramatic changes that have taken place across North Africa and the Middle East since the wave of pro-democracy movements began over a year ago and which continue to impact the region and the world.