28 September 2012
A range of African ministers took to the podium of the United Nations General Assembly today to highlight the precarious situation arising from food insecurity and the slow-down in development due to the global economic crisis.

Tanzania’s Foreign Minister, Bernard Kamillius Membe, said food insecurity had deteriorated and the vulnerability of many developing countries increased since his nation’s President Jakaya Mrisho Kikwete voiced serious concern over the issue at the UN a year ago.

“We must work collectively to address food insecurity,” he told the 67th Assembly on the fourth day of its annual General Debate at UN Headquarters in New York. “We must increase food production and productivity on a sustainable basis, strengthen agricultural systems and establish early warning mechanisms as we also must develop effective responses to calamities such as those in the horn of Africa and the Sahel region.”

Mr. Membe noted that the world's economy still remains fragile after the financial crisis of 2008, compounding the challenges of sustainable development. “This situation is further exacerbated by the effects of climate change, population growth, poverty, unemployment, hunger, diseases, growing economic inequalities within and among countries as well as lack of rule of law and violations of human rights,” he said.

“I know for sure that the global economic crisis is far from over,” he said. “Many reports are predicting the re-occurrence of the crisis which will certainly affect the flow of aid, trade, FDIs (foreign direct investment) and remittances to developing countries.”

He also reiterated the African demand for expansion of the 15-member Security Council to include two permanent members from the continent with veto powers.

Burkina Faso’s Foreign Minister, Djibrill Yipènè Bassolé, said his country had suffered a food crisis this year because of a bad rainy season. “The cereal shortage has been exacerbated by a massive influx of tens of thousands of refuges from Mali, sometimes accompanied by their cattle,” he said.

“The restoration of a stable and lasting peace in Mali will require a global approach combining political dialogue and the use of force essentially aimed at neutralizing transnational extremist groups whose presence in northern Mali is sure to deliver an irreparable blow to efforts for better governance and social and economic development,” he said.

The Prime Minister of Sao Tome and Principe, Patrice Emery Trovoada, lamented the inability of the United Nations to confront the situation in Mali – where the Islamic militants are also reported to have destroyed World Heritage religious sites – as well as the crisis in Syria, where over 18,000 people have been killed since an anti-government uprising erupted 18 months ago.

“Sadly our organization continues to suffer from the roadblocks that prevent urgent decisions that cannot be postponed from being taken and that undermine the forum’s credibility,” he said.

He added, “We need no further evidence of the urgency for in-depth reforms of our institution, primarily the Security Council, to put an end to the horrific images of children that are symbols of purity and innocence who are killed daily in Syria, to prevent the destruction of the world historic and cultural heritage by gangs of destructive criminals in Mali and Afghanistan and to prevent coups d’état or obvious attempts to destabilize states and democratic Governments.”

Guinea’s Foreign Minister, Edouard Niankoye, addressing the General Debate on Thursday, endorsed the Malian Government’s request to the Security Council for the deployment of an international force to restore the country’s territorial integrity.

“In neighbouring Mali, where terrorist and rebel groups have occupied the north for several months, the reinforcement of democratic institutions and the restoration of territorial integrity constitute major challenges that must be taken up,” he told the Assembly.

Also speaking in the General Assembly on Thursday, Burundi’s First Vice President, Therence Sinunguruza, voiced his country’s hope that the Malian Government will find a rapid solution to the crisis in its north.

Burundi “is equally confident that Mali will soon renew the democratic process to establish institution stemming from free and transparent elections,” he said, referring to the March 2012 military coup when soldiers took control of the West African country.

The African ministers are among scores of world leaders and other high-level officials presenting their views and comments on issues of individual national and international relevance at the Assembly’s General Debate, which ends on 1 October. 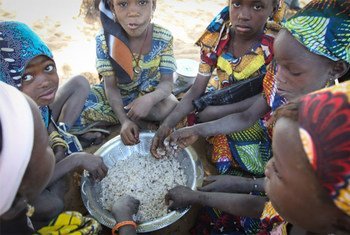 26 September 2012
United Nations Secretary-General Ban Ki-moon today called for urgent international support for the people and governments of West Africa’s Sahel region, warning that the area is at a critical juncture with 18 million people affected by a severe food crisis.