Speaking from the podium of the United Nations General Assembly, Lebanon’s Prime Minister Najib Mikati today called on the international community to help his country tend to the influx of refugees fleeing the violence in neighbouring Syria.

“Lebanon alone cannot handle the increasing number of displaced migrants, as international support and assistance on all levels is much needed,” he told the 67th Assembly’s General Debate, at UN Headquarters in New York.

The crisis in Syria has seen over 18,000 people killed and hundreds of thousands of others driven from their homes since a popular uprising against President Bashar al-Assad erupted 18 months ago. A further 2.5 million Syrians urgently need humanitarian aid, according to UN estimates.

“The security consequences of the Syrian crisis threaten peace and stability in the Middle East and specifically in Lebanon,” Prime Minister Mikati said. “The international community must exert more efforts in order to assure political consensus among Syrian parties to end violence that is claiming hundreds of innocent lives each day.”

The ongoing violence in neighbouring Syria has fuelled sectarian tensions across Lebanon and raised concerns that the country could plunge back into the internecine violence it endured during its 15 year civil war, which ended in 1990.

In his statement to the Assembly, the Lebanese leader urged the United Nations to further the right of the Palestinian people to return to their homeland and achieve an independent Palestinian State with Jerusalem as its capital. He also denounced Israel for violations of the accord that ended its month-long war with Hizbollah in 2006, calling on it to end its continued occupation of land in southern Lebanon.

“Our region is still striving to cope with the dramatic consequences that followed the establishment of the state of Israel in 1948 and its on-going occupation of Arab territories and its continued violations of International Law and United Nations resolutions,” Prime Minister Mikati said.

He added, “Peace along with freedom and justice are the pillars for attaining both security and stability and will pave the way towards the eradication of oppression, extremism, and terrorism in our world. Stability cannot occur without a Palestinian spring through the full implementation of the Palestinians right to self-determination on their land.”

The Lebanese Prime Minister is one of scores of world leaders and other high-level officials presenting their views and comments on issues of individual national and international relevance at the Assembly’s General Debate, which ends on 1 October.

Also on Thursday, Prime Minister Mikati met with Secretary-General Ban Ki-moon. They shared views on the regional implications and spillover effects of the Syrian crisis, and emphasized the need to preserve the security and stability of Lebanon. The Secretary-General expressed his appreciation for the Prime Minister’s efforts in this regard.

The two men also stressed the need for greater international support to help Lebanon provide the necessary humanitarian assistance to the growing numbers of refugees from Syria.

In addition, the UN chief welcomed the commitment of all Lebanese political parties to national unity and dialogue, and commended the pursuit of the so-called National Dialogue under the leadership of President Michel Sleiman. He underscored the need for further efforts in this regard and the importance of continued international support to the Government and the Lebanese Armed Forces.

Lebanese political leaders resumed the National Dialogue in June, following its suspension since November 2010, in light of sectarian violence in Lebanon linked to the conflict in Syria. 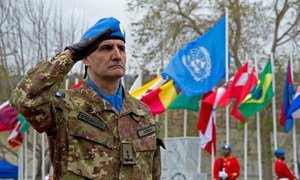 The head of the United Nations peacekeeping force in Lebanon today chaired a meeting with senior officials from the Lebanese and Israeli militaries as part of ongoing UN-sponsored efforts to reduce tensions and boost security along the countries’ border area.