“Holding elections itself is not a sufficient condition for consolidating democracy”, President Mohammed Waheed of the Maldives told the UN General Assembly today, noting that that patience, hard choices and compromises were as important as “cultivating and nurturing democratic values.”

The Maldivian President, in his address to the 67th Assembly’s General Debate, said that the road to liberal democracy is always “rocky and long” and has to be navigated by a political leadership “with unshakable commitment to the principles and values of democracy.”

Nations must be allowed to resolve their problems on their own, the President added, as he reiterated his country’s commitment to creating a democratic and free society, and spoke of the transition from an authoritarian system “purely by peaceful means.”

Multi-party presidential elections were held in the Maldives for the first time in 2008, ending 30 years of one-party rule.

A political crisis broke out in February 2012 following the resignation of the then-President Mohammed Nasheed. He was succeeded by his former deputy, Mohammed Waheed Hassan. Secretary-General Ban Ki-moon called for a national process based on dialogue and consensus to resolve the political impasse peacefully and to diffuse tensions.

The Government set up a National Commission of Inquiry to probe the events leading to the regime change, with the Commission presenting its findings in August 2012.

Mr. Ban subsequently called on the parties to respect the Constitution, create a peaceful and transparent environment conducive to dialogue and to take steps to strengthen democratic reform and institutions.

Reviewing the progress made since 2008, President Waheed asked whether the lives of his country’s citizens were better.

“The answer, regrettably, would be ‘not yet,”” he stated, noting that the experience of democracy in his country was “deeply divisive,” and lamenting that centuries old values of respect and tolerance had been replaced with intolerance and hatred.

Going on to speak of the challenges facing the Maldives, he said that the Government currently spends more than 27 per cent of its national budget on building resilience to combat the effects of climate change. Some of the problems faced by his country include coastal erosion, ocean acidification, variability of precipitation and the threat of sea-level rise.

President Waheed informed the Assembly that his country was one of the first to eradicate chlorofluorocarbons and by converting to solar or hybrid sources, the Maldives was redoubling efforts to transform the economy into a low-carbon one.

As one of the smallest island economies in the world, the Maldives leaders reiterated a call for a binding agreement to reduce global carbon emissions. He called upon larger States, endowed with more resources to reduce their carbon footprint by showing political commitment and making difficult choices.

President Waheed is one of scores of world leaders and other high-level officials presenting their views and comments on issues of individual national and international relevance at the Assembly’s General Debate, which ends on 1 October. 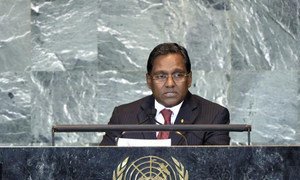 The political transitions in various Arab countries this year demonstrate that Islam is compatible with human rights and democracy, the Vice-President of the Maldives Mohamed Waheed told the General Assembly today.