27 September 2012
The vital role of women in society was a key feature in the speech of Mongolia’s President Tsakhia Elbegdorj to the United Nations General Assembly today, with a particular call for more women in leadership positions.

“Have you ever heard of a woman bloody dictator or tyrant? I think not. If there were more women in power, I think we would have more harmony, more engagement and less suffering and less conflict,” he added, noting that at his country last elections, it tripled the number of women in its parliament.

With mothers wanting a better life for their children, the Mongolian leader said too many of them suffer when their children struggle – whether it is for lack of human rights or economic opportunity – and highlighted their valuable role in society.

“My 92-year-old-mother reminds me daily to serve all people with respect – especially women, children and the elderly. Women are the backbone of the family and the bedrock of a nation,” he said. “They bring life into the world. They sense the cries of an infant. Their instincts are to care for the old, the sick and those in need. Our mothers, sisters and daughters share a core value of caring for others.”

Noting that education is the “most basic” human right and the fundamental building block for human development and free societies, President Elbegdorj said that the way to empower women is to ensure that girls share the same education opportunities as boys.

“The return on investment will be higher – for both the young men and women of tomorrow and for the world. Educated nations are more secure economically, respect human rights and have greater political freedom,” he said, adding that instead of weapons, the world should invest more in education. “We owe our children – all of them – the doors that a strong education can open.”

Citing the historic Mongolian leader Genghis Khan, President Elbegdorj reaffirmed his country’s commitment to being part of the international community and its efforts to create a better world, despite the challenges involved in those efforts.

“Eight hundred and fifty years ago, our great King [Genghis] Khan was born. He built the largest land empire in the history of the world. This great King did not erect a single statue to himself. [Genghis] Khan famously noted, ‘It was easier to conquer the world on horseback than to dismount and try to govern,’” the President said.

Other topics covered in his statement to the General Debate included the crisis in Syria, the need to protect the environment and expanding human rights.

President Elbegdorj is one of scores of world leaders and other high-level officials presenting their views and comments on issues of individual national and international relevance at the Assembly’s General Debate, which ends on 1 October. 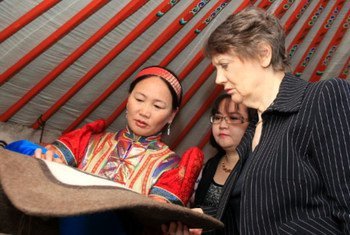 21 October 2011
The recent economic growth in Mongolia due to a boom in its mining sector represents an opportunity to reduce poverty in the country, the United Nations development chief Helen Clark said, encouraging the Government to implement long-term sustainable policies that will increase prosperity for all of its citizens.