King Abdullah II of Jordan today called for more international help to prevent a humanitarian disaster for over 200,000 Syrian refugees who have fled the fighting in their homeland, stressing that the United Nations has an important role to play in finding a political solution in the neighbouring country.

“Violence must end immediately and a transition must begin now,” he told the 67th General Assembly at the start of its annual General Debate.

The Jordanian leader said there is no alternative to a political solution in Syria, where more than 18,000 people, mostly civilians, have died since the uprising against the regime of President Bashar al-Assad began 18 months ago. A further 2.5 million Syrians urgently need humanitarian aid, according to UN estimates.

Hosting the 200,000 Syrians who have fled to Jordan has put a heavy burden on the country’s limited resources and economy, King Abdullah II noted, adding that Jordan is “very grateful for the generous response of governments, international bodies and dedicated UN organizations.”

“The sombre reality is, however, that more will be needed as the camps grow more crowded withy vulnerable families and the cold desert winter approaches,” he said. “I call upon the countries of the United Nations to work together to prevent a humanitarian disaster.”

Referring to the anti-Islam video made in the United States and the deadly violence it sparked in various countries over the past weeks, King Abdullah II condemned “all acts that vilify the name of the Prophet (Mohammed), or falsely use his name or the name of Islam or any other religion for that matter to justify violence and evil acts, such as we have recently witnessed.

“There are no sidelines on this issue. All of us, of every faith, everywhere, must be pro-active in promoting understanding and a much stronger global dialogue,” he said.

King Abdullah II also called for an end to the Middle East conflict with a just solution that sees a Palestinian state living side by side with a secure Israel at peace with the entire region.

He said continuing illegal settlement building by Israel and unilateral actions directly threaten a negotiated peace, and voiced particular concern at threats to Jerusalem and the sanctity of its Muslim and Christian holy sites.

Any invasion or division of the site of the Al-Aqsa mosque, Islam’s third holiest place, would not only be a breach of Israel’s obligations but a profound religious transgression, he warned.

“The Arab world is seeking peace, real peace diplomatic relations, economic relations, trade, investment, a new normality in peace where people are safe in their homes, where communities are able to build, and where cooperation helps the entire region prosper,” he said of the Arab peace initiative of 2002.

He added, “It is time for Israel to turn around, look at the future we share, and make a just and lasting peace with the Palestinians.”

In addition to King Abdullah II, scores of the world’s heads of State and government and other high-level officials are presenting their views and comments on issues of individual national and international relevance at the Assembly’s General Debate, which ends on 1 October. 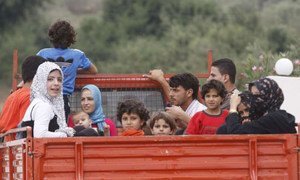