25 September 2012
Given the United Nations Security Councils’ failure to agree on collective action in relation to Syria, the Emir of Qatar, Sheikh Hamad bin Khalifa Al-Thani, today urged countries to contribute to the provision of support to the Middle Eastern country’s people until they gain their “legitimate rights.”

“We have used all available means to get Syria out of the cycle of killing but that was in vain. The Security Council failed to reach an effective position,” Sheik Al-Thani said in his statement to the 67th UN General Assembly’s General Debate, which began today.

“In view of this, I think that it is better for the Arab countries themselves to interfere out of their national, humanitarian, political and military duties and do what is necessary to stop the bloodshed in Syria and the killing of innocent people and their displacement in order to guarantee a peaceful transition of power in Syria,” he added, pointing to the intervention of Arab forces in war-torn Lebanon in the mid-1970s as a precedent.

He continued, “We urge all countries that believe in the cause of the Syrian people to contribute to the provision of all sorts of support to this people until it gains its legitimate rights.”

More than 18,000 people, mostly civilians, have died since the uprising against the regime of Syrian President Bashar al-Assad began 18 months ago. Amidst reports of an escalation in violence over recent weeks, UN agencies now estimate that some 2.5 million Syrians are in urgent need of humanitarian assistance.

Addressing the broader changes that have affected the Arab world – as encompassed in the wave of democratic protests which engulfed the Middle East and North Africa during the Arab Spring – Sheik Al-Thani said that “the Arab experience of transition is unique in its pace and process,” as well as “natural and historic.”

“Conditions in the Arab world, seen from afar, may show that there are disturbances and problems all over the place filling it with flames and smoke,” he said. “However, I would like from this rostrum to assure all those who are following the events in the region, and sometimes feel uncomfortable at what they see and hear, is that it is only the movement of a nation struggling to cope with this age and contribute to its march as it has done many times before it was interrupted by obstacles, both external and internal, regional and international.”

Also, compared to similar historical transitions in the US, Europe and Asia, the Emir noted, the changes in the Arab world have taken place “under spotlights, before the eyes of the whole world” given the intense media coverage of the developments.

However, the Qatari leader said that despite all the suffering in the Middle East, the region’s core problem remains the Palestinian question and the continued Israeli occupation of the Arab territories in the West Bank, the Golan Heights and the Shaba’a Farms in southern Lebanon, in addition to Israel’s ongoing blockade of the Gaza Strip.

The Israeli blockade of the Gaza Strip is now in its sixth year. It imposed the blockade for what it called security reasons after the Hamas group, which does not recognize Israel’s right to exist, ousted the Fatah movement from the Strip in 2007.

In his statement, Emir Al-Thani also called on the United Nations and “those of wisdom and reason and those who have the power of decisions at the international level” to produce internationally-agreed upon laws, procedures and controls to prevent religions from being insulted, while at the same time ensuring the right to freedom of expression.

Cities in North Africa and the Middle East recently experienced violent protests in response to an anti-Islamic video produced in the state of California by a US citizen, as well as cartoons published in a French magazine. According to media reports, at least 30 people have been killed in the violence.

The Emir also met with Secretary-General Ban Ki-moon on Tuesday. In their meeting, the two men discussed developments underway in the Arab world, in particular the situations in Syria and Libya, and the Middle East peace process.

They also discussed Qatar’s hosting in November of the 18th Conference of the States Parties to the UN Framework Conventions on Climate Change (COP18), which Secretary-General Ban noted would advance climate change negotiations ahead of a 2015 deadline. 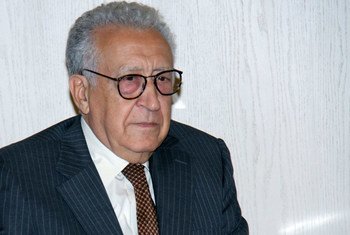 24 September 2012
The Joint Special Representative of the United Nations and the League of Arab States on the Syrian crisis, Lakhdar Brahimi, today announced that while the situation in Syria continues to be “very grim,” a solution may be forthcoming.