With new leadership, Ban seeks to boost efforts to achieve sustainable energy for all

With new leadership, Ban seeks to boost efforts to achieve sustainable energy for all

24 September 2012
Secretary-General Ban Ki-moon today announced the appointment of a new United Nations envoy to spearhead efforts to achieve sustainable energy for all, as well as other arrangements that will not only help transform the world’s energy systems but also the lives of billions of people.

Speaking at a high-level event held on the margins of the General Assembly, Mr. Ban confirmed that he had asked Kandeh Yumkella, currently the Director-General of the UN Industrial Development Organization (UNIDO) and Chair of the umbrella group known as UN-Energy, to serve as his Special Representative for Sustainable Energy for All.

Mr. Yumkella will also serve as chief executive of the Sustainable Energy for All initiative the Secretary-General launched last September, with the aim of providing universal energy access, doubling the rate of global energy efficiency improvement, and doubling the share of renewable energy in the global energy mix.

“Providing sustainable energy for all could be the biggest opportunity of the 21st century,” said Mr. Ban. “Sustainable energy is the golden thread that connects economic growth, social equity, and a climate and environment that enables the world to thrive. This initiative is bringing together governments, the private sector, and civil society in a partnership that’s delivering real results.”

In addition, Mr. Ban announced that he had invited the President of the World Bank, Jim Yong Kim, to serve with him as co-chair of the initiative’s newly formed Advisory Board. The Board will provide strategic guidance to the work of the initiative. Its members, who will be announced soon, will be drawn from the private sector, civil society and governments that have shown exceptional leadership.

The Secretary-General also announced the creation of an Executive Committee, to be chaired by Chairman of the Bank of America, Chad Holliday, which will provide operational oversight for the work of the chief executive. As well, a global support team will be established to strengthen coordination among various partners.

“We are not establishing a new institution, but rather, building on what already exists and works well,” Mr. Ban told the event. “With these four elements, Sustainable Energy for All is poised to draw in new partners and become a global network that can help transform the world’s energy systems – and the lives of billions of people.”

He said that the initiative aims to provide more than one billion people with access to modern energy services during its lifespan.

“This is how Sustainable Energy for All will be measured – by children newly able to study after dark, mothers breathing healthy air, doctors caring for the sick night and day, businesses seeing new prosperity, a cleaner environment and a path that will help us to avoid the catastrophe of climate change.”

According to a news release, Mr. Yumkella said he is ready to take this “path-breaking” initiative to the next level. “We will continue to work with all key stakeholders to achieve sustainable energy for all and drive real action on the ground – action that transforms lives, communities, economies and the environment,” he said.

Since its launch one year ago, the Sustainable Energy for All initiative has attracted the voluntary participation of some 60 developing countries; mobilized more than $50 billion from the private sector and investors; and catalyzed hundreds of actions and commitments in support of the three core objectives of the initiative.

Today’s event saw significant new commitments to action, including a pledge by the Inter-American Development Bank for $5 billion in five years for work related to the initiative in Latin America and the Caribbean.

Also, the electronics manufacturing firm Philips has announced it will install 100 “light centres” across rural Africa that are the size of small soccer fields and lit using a new generation of highly efficient solar powered LED lighting. 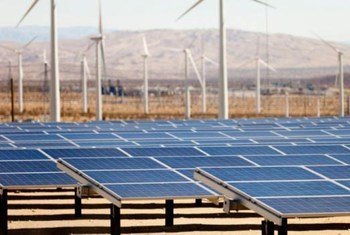 21 June 2012
Speaking in Brazil today, Secretary-General Ban Ki-moon announced that more than one hundred commitments and actions have been already mobilized in support of the UN’s global sustainable energy initiative.