UN Photo/S. Liechti
People flee their homes as fighting continued between FARDC and M23 rebels in the Rutshuru territory in July 2012.

18 September 2012
The United Nations refugee agency today appealed for just under $40 million to help almost half a million civilians displaced by conflict in the Democratic Republic of the Congo (DRC).

“The situation remains volatile and we expect further displacement this year,” Melissa Fleming, spokesperson for the UN High Commissioner for Refugees (UNHCR), told reporters in Geneva.

Under-Secretary-General for Peacekeeping Operations Hervé Ladsous, who just returned from a visit to the region, told reporters in New York that there are “too many victims, too much suffering, too many displaced persons and refugees. This has to stop.”

Mr. Ladsous briefed the Security Council in a closed-door session on his visit, which took place ahead of the mini-summit on the Great Lakes region slated to be held next week on the margins of the General Assembly’s high-level debate. Among the issues that need to be tackled at the summit, he said, will be the need for the sovereignty of the DRC to be respected and the need for confidence to be rebuilt, especially between the two main neighbours – DRC and Rwanda.

Ambassador Peter Wittig of Germany, which holds the Council’s rotating presidency for this month, told reporters that the 15-member body agreed that a political solution to the crisis is “of utmost priority.” He added that dialogue, confidence-building and cooperation between Kinshasa and Kigali are urgently needed to address the root causes of the conflict, referring to the capitals of the DRC and Rwanda, respectively.

“If the violence and abuse of civilians continues to rise in the eastern provinces, the number of new IDPs is expected to be even higher, and may reach as many as 760,000 in the coming months,” said Ms. Fleming.

Specific needs in DRC include emergency shelter for 40,000 households in North Kivu and Province Orientale; basic domestic items for 15,000 households, including 2,000 spontaneous returnees from Uganda; sanitary material for 50,000 women; and family latrines for 10,000 households.

Scarcity of land is the main challenge in Rwanda, Ms. Fleming noted. Kigeme refugee camp, which opened in June and hosted 13,000 people at the end of August, will have a capacity for 25,000 refugees. But it is located on hillsides in the Southern province.

“To make the land fully useable, the hillsides need to be terraced, which is an expensive process,” said Ms. Fleming. In addition to the refugees at Kigeme, almost 7,000 were accommodated by the end of August at the crowded Nkamira Transit Centre, which needs upgrading. The extra funding is also needed in areas such as registration, aid packages, education, health, livelihoods, fuel, and construction of latrines.

Remoteness of the area and lack of access are also major challenges in Uganda, the agency reported. Infrastructure and basic services, including facilities health centres and schools, are lacking at the reopened Rwamwanja settlement. Some 24,000 people have been transferred from Nyakabande to Rwamwanja and two other settlements since April. Service delivery in Nyakabande Transit Centre, where more than 40,000 people have been registered, is also a challenge.

Another major concern is the high prevalence of malnutrition, with current levels among arrivals well above what is acceptable in an emergency.

The extra funding is needed, among other things, to boost protection and community services, reinforce basic services; construction or rehabilitation of roads and facilities in Rwamwanja, including health clinics and a laboratory; provision of at least 20 new classrooms in existing schools and creation of a new one; 120 new water sources or boreholes; and shelter and sanitation kits.

UNHCR declared eastern Congo in a state of emergency in late May after the fighting erupted in April. Unrelated fighting in South Kivu between Mai Mai militia and the rebel Democratic Forces for the Liberation of Rwanda (FDLR) has also caused displacement, while a power vacuum in parts of the east has caused further insecurity and suffering for civilians.

“We are particularly alarmed about the large number of human rights violations in North and South Kivu, where more than 15,000 protection incidents, including, murder, rape and forced recruitment have been reported since April. The real number is probably much higher,” said Ms. Fleming.

According to the UN Office for the Coordination of Humanitarian Affairs (OCHA), almost two million people are internally displaced in eastern DR Congo, including some 220,000 who have been forced to flee their homes since April in North Kivu, 108,000 in South Kivu and 62,000 in Orientale. 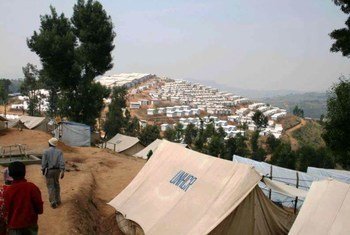 9 August 2012
In the wake of a visit to a refugee camp in southern Rwanda, the United Nations top humanitarian official today called for greater support for people displaced by fighting in the eastern Democratic Republic of the Congo (DRC).