The United Nations refugee agency today announced it is awarding the prestigious 2012 Nansen Refugee Award to Hawa Aden Mohamed for her humanitarian work helping Somalia’s refugee girls and women under extremely challenging circumstances in a country battered by decades of violence, conflict and human rights abuses.

“When Hawa Aden Mohamed rescues a displaced girl, a life is turned around,” said UN High Commissioner for Refugees António Guterres. “Today, we are saluting her for her work to save, nurture and educate hundreds of women and girls, many victims of the worst kind of violence.”

Somalia has been struck by conflict for more than two decades, which has forced more than two million people to seek safety and shelter either elsewhere inside the country or beyond its borders. This was exacerbated by last year’s drought and ensuing famine, which uprooted an additional half million people.

Ms. Aden Mohamed is a former refugee herself, who chose to return to her war-torn homeland in 1995 and launched an education programme to assist those uprooted by conflict and recurring droughts.

“Her visionary work has transformed the lives of thousands of displaced women and girls, who are among the most vulnerable members of Somali society and in many cases are grappling with the trauma of marginalization, abuse and sexual violence, including rape,” UNHCR said in a news release.

The agency highlighted Ms. Aden Mohamed’s “exceptional, tireless and inspiring humanitarian work” through the Galkayo Education Centre for Peace and Development in Puntland, north-eastern Somalia, of which she is founder and director. The Centre, which has reached more than 215,000 people, provides secondary education as well as vocational training so that women and girls can make a living on their own, and influence their future and their own role in Somali society.

Ms. Aden Mohamed is also a vocal campaigner for women’s rights, particularly opposing female genital mutilation (FGM), with her sister having died from an infection after she was circumcised at about the age of seven. The Galkayo Education Centre also provides counselling for circumcised women and girls and survivors of gender-based violence.

“It’s time for the culture to change,” she said. “We need to keep the good and let go of the bad. And the good is to empower the girl.”

The Centre also provides vocational training in carpentry and welding to help keep displaced young boys off the streets and prevent them from falling into the clutches of criminal or armed groups in Somalia.

“Madam Hawa Aden Mohamed is a woman of courage,” said UNHCR Special Envoy Angelina Jolie, congratulating her on her award. “A former refugee herself, Madam Hawa demonstrates the strength that refugees bring to society. Despite more than two decades of conflict which has ripped apart Somali society, forcing more than two million Somalis to flee their homes, Madam Hawa has proven that, even in the most difficult circumstances, every child can and should have a chance to learn.”

Created in 1954 in honour of Fridtjof Nansen – the Norwegian explorer, scientist and the first League of Nations High Commissioner for Refugees – the annual award is given to an individual or organization for outstanding work on behalf of refugees.

This year’s award ceremony will take place on 1 October in Geneva. 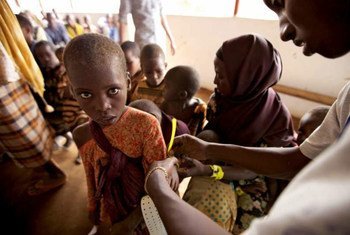 26 June 2012
The UN refugee agency said today that growing numbers of displaced Somalis have been citing difficulty in providing for themselves as the main reason for fleeing their homes.