The top United Nations envoy in Somalia on Sunday hailed the inauguration of President Hassan Sheikh Mohamud as a “new era” for the war-scarred nation and pledged the world body's continued support to help it move forward.

“This is another great day for Somalia and the Somali people,” said Augustine P. Mahiga, the Secretary-General's Special Representative and head of the UN Political Office for Somalia (UNPOS).

He said the inauguration of the new President – elected a week ago – marks the end of the transitional period and the beginning of a “new era” for a country that has seen tremendous strife over the past several decades.

The election marked the culmination of a series of landmark steps to bring an end to the country's eight-year political transition that also included the adoption of Somalia's provisional constitution, the establishment of the New Federal Parliament and the appointment of that body's Speaker.

“As the process moves forward,” said Mr. Mahiga, “the UN Political Office for Somalia will continue to stand with the President in addressing key immediate tasks, including stabilization of newly recovered areas, ensuring the integration and stability of the security services, delivering basic services to the Somali people and building a viable judiciary system.”

Just two days after his election, the new President survived an attack on a hotel in the capital, Mogadishu, where he was giving a press conference. UN officials, including Mr. Mahiga, condemned the attack, stressing that such attempts to thwart the progress made so far will not deter the Somali people's determination to move forward. 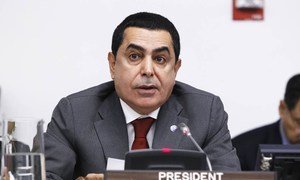 The President of the United Nations General Assembly, Nassir Abdulaziz Al-Nasser, today condemned in the strongest possible terms yesterday’s attack on the hotel in Mogadishu, Somalia where the country’s new President, Hassan Sheikh Mohamud, was giving a press conference and which resulted in one death and several injuries.