UN Photo/S. Liechti
People flee their homes as fighting continued between FARDC and M23 rebels in the Rutshuru territory in July 2012.
8 September 2012

In a statement delivered to the International Conference on the Great Lakes Region (ICGLR), its third recent meeting to focus on security in the DRC, the UN chief called for an immediate end to the operations of the band known as the 23 March Movement (M23) and other armed groups, as well as any external support provided to them.

“I remain deeply concerned about the security and humanitarian conditions in eastern DRC, resulting from the activities of the 23 March mutineers, as well as other national and foreign armed groups,” Mr. Ban said in the message, which was delivered on his behalf by Abou Moussa, his Special Representative and head of the UN Regional Office for Central Africa (UNOCA).

The eastern DRC – particularly its provinces of North Kivu and South Kivu – has been plagued by violence over the past few months. One of the key actors is the M23, made up of renegade soldiers from the DRC's national army.

The M23 has clashed with national army troops, which have been supported by peacekeepers from the UN Stabilization Mission in the DRC (MONUSCO), and has caused massive displacement of local residents, in addition to raising concerns about the region's stability.

On the humanitarian front, the fighting has uprooted nearly half a million people over the past months, including more than 226,000 people in North Kivu province, 200,000 in South Kivu province, and more than 57,000 who have fled to neighbouring Uganda and Rwanda. The M23's activities have led to previous condemnation from Secretary-General Ban and the Security Council.

“The worsening security and humanitarian conditions continue to pose a threat to stability in the wider Great Lakes region,” Mr. Ban said in his message.

Noting a lull in military activities by the M23 in North Kivu since July, he stressed that the situation remains very fragile, and he called for the group's “immediate and complete cessation of all destabilizing activities.”

“I once again condemn the violence and serious human rights violations committed by the M23, as well as other armed groups, against civilians, which need to be thoroughly investigated by relevant institutions and the perpetrators held accountable,” he said.

The UN chief said he looked fort further progress in the development of a roadmap of initiatives to address the situation in eastern DRC and look forward to the outcomes, pledging the readiness of the United Nations to provide appropriate support in cooperation with the African Union and regional and international partners.

In his call for an end to the external support reportedly received by the armed groups, Mr. Ban stressed that military deterrence alone will not resolve the current crisis.

“I strongly encourage continued and strengthened high-level dialogue at the bilateral and regional level aimed at finding a durable solution including through addressing the underlying causes of the conflict,” he said.

The Secretary-General also signalled his intention to reinforce regional efforts find a peaceful resolution to the crisis in eastern DRC by convening, on 27 September in New York, a high-level meeting on the situation in eastern DRC in the margins of the General Assembly,.

In preparation for that meeting, he said, the head of the UN Department of Peacekeeping Operations, Hervé Ladsous, will visit the region from 9 to 15 September, and he looked forward to cooperation with ICGLR Member States and international partners. 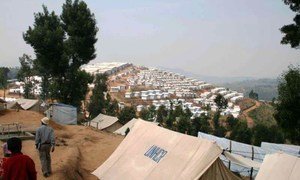