“Criticizing the Government and calling for reforms are not crimes,” the UN High Commissioner for Human Rights, Navi Pillay, said in a news release. “The Government must engage in an open, genuine and meaningful dialogue with the opposition, across the political spectrum. This is the only constructive way to defuse an increasingly tense situation.”

According to a news release from the Office of the UN High Commissioner for Human Rights (OHCHR), the individuals whose sentences were upheld Tuesday were initially convicted last year by Bahrain’s Court of National Safety, essentially a military court, on charges of conspiracy to overthrow the Government, amongst other changes. Some were also charged with espionage.

After the convictions were upheld by the National Safety Appeals Court, the Government announced that all the cases would be transferred to civilian courts. The appeals proceedings took place this year.

“I had welcomed the Bahraini Government’s decision to transfer these cases to civilian courts, as military trials of civilians raise serious problems as far as the equitable, impartial and independent administration of justice is concerned,” Ms. Pillay said.

“But now, given the gravity of the charges, the scant evidence available beyond confessions, the serious allegations of torture and the irregularities in the trial processes, it is extremely disappointing that the convictions and sentences have been upheld in appeals proceedings that often took place behind closed doors,” she added.

The appeals proceedings began in open session, but the court subsequently closed the hearings, purportedly for national security reasons, according to the OHCHR release.

“None of the courts so far adequately addressed the defendants’ allegations that they were tortured in detention and forced to make confessions under duress,” said Ms. Pillay, who also noted that that the report of the Bahrain Independent Commission of Inquiry, in November last year, found a discernible pattern of mistreatment of detainees for the purpose of obtaining incriminating statements or confessions.

Yesterday, Secretary-General Ban Ki-moon expressed concern over the appeals court’s decision, urging Bahraini authorities to ensure that due process is observed and that rights to freedom of expression and peaceful assembly are respected.

In the OHCHR news release, the human rights chief also pointed to a separate case in August, in which a prominent human rights defender, Nabeel Rajab, was sentenced to three years in prison on charges of taking part in illegal gatherings. Ms. Pillay reiterated her call to Bahraini authorities to release all of those detained for exercising their rights to freedom of expression and of peaceful assembly. 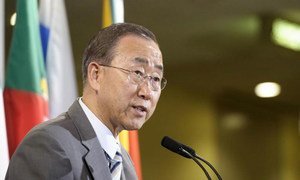 United Nations Secretary-General Ban Ki-moon is concerned at the harsh sentences, including life imprisonment, upheld by a Bahrain appeals court against 20 Bahraini political activists, according to his spokesperson.