Syria: UNICEF scales up health and nutrition response for children affected by crisis

Syria: UNICEF scales up health and nutrition response for children affected by crisis

6 September 2012
United Nations agencies and their partners are carrying out nutrition screening and vaccination campaigns as part of a regional response to meet the health and nutrition needs of some 1.3 million children affected by the ongoing crisis in Syria.

“Conflict has disrupted health services across Syria so most refugee children and their families have not had access to routine immunizations or other basic health services,” the Middle East Regional Health Advisor for the UN Children’s Fund (UNICEF), Mahendra Sheth, said in a news release.

“This work is vital because during a crisis children are most vulnerable to disease outbreaks and malnutrition, especially children living in camp settings like Za’atari,” he added.

Nutrition screening in Za’atari refugee camp, in northern Jordan, is taking place in parallel to a weekly immunization clinic in the camp, according to UNICEF.

The agency, along with the Jordanian Ministry of Health, the UN World Health Organization (WHO) and other partners, are also launching a large-scale polio and measles vaccination campaign targeting more than 100,000 children in Za’atari, nearby transit centres, and communities hosting refugees in northern Jordan.

More than 18,000 people, mostly civilians, have died since the uprising against President Bashar al-Assad began nearly 18 months ago. Amidst reports of an escalation in violence in recent weeks in many towns and villages, as well as the country’s two biggest cities, Damascus and Aleppo, UN agencies now estimate that some 2.5 million Syrians are in urgent need of humanitarian assistance.

UN officials have been calling for enhanced international support to respond to the growing crisis, in particular for the $180 million Humanitarian Response Plan, which is only half-funded, with some critical sectors having received almost no funding at all.

UNICEF is appealing to the international community for increased funding of its emergency water, sanitation, education, health and nutrition programmes, which are reaching tens of thousands of Syrian children and their families in Syria and neighbouring countries.

“The health and nutrition needs of Syrian children across the region are rapidly increasing so we must act now to ensure they are protected,” says UNICEF’s Middle East and North Africa Regional Director, Maria Calivis.

The agency noted that amid extremely difficult working conditions, it, along with local partners in Syria, is reaching families sheltering in schools across Damascus with life-saving health care.

Eight mobile medical teams are to be dispatched to reach 175,000 people in many areas hardest hit by the ongoing conflict, including Aleppo, Damascus, Dara’a, Hama and Homs, while rapid assessments to monitor the nutritional situation of children will also be scaled up.

Immunizations are also being provided in Lebanon and Iraq, where more than 40,000 and 15,000 Syrian refugees are sheltering respectively, and the nutritional status of children five years of age and under is being monitored closely. 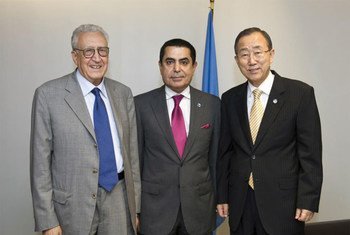 4 September 2012
Secretary-General Ban Ki-moon today appealed to Member States to provide strong and unified support to the new Joint Special Representative of the United Nations and the League of Arab States on the Syrian crisis, Lakhdar Brahimi, as he takes up a “difficult and essential” mission amid an intensifying conflict that shows no sign of abating.