A United Nations human rights official today stressed that the Government of Syria and opposition forces can take concrete steps to protect civilians from the ongoing violence.

“There are very concrete things that the parties can do to protect civilians, who as we all know are suffering in this situation,” said Georgette Gagnon, the Director of Human Rights for the UN Supervision Mission in Syria (UNSMIS), which wrapped up its mandate last week.

“Both parties – but the Government in particular – have an obligation to protect civilians in this type of situation.”

In an interview with UN Radio, Ms. Gagnon stressed that the Government could prevent civilians from getting caught in the fighting by giving them enough warning to leave areas before military operations are carried out there.

“The Government could also ensure that the hospitals and the medical clinics are not militarized and not subject to attacks, and that everybody who needs medical care can get access to it in addition to other types of humanitarian assistance,” Ms. Gagnon said.

“On the opposition side, we would say that they must do more to protect civilians and ensure that they are not placing themselves in areas where there are lots of civilians, making the area more likely to be attacked by the Government.”

Ms. Gagnon said that civilians were particularly concerned about access to food, water, electricity, schooling and other types of medical services, especially in areas where the fighting has intensified such as the cities of Homs and Deir ez-Zor.

“It was very distressing to see cities such as Aleppo or suburbs around Damascus being the subject of helicopter bombardments and other types of aerial attacks,” Ms. Gagnon said. “Huge amounts of people are fleeing areas and living as internally displaced persons in school in very poor conditions.”

Earlier this month, the UN Independent Commission of Inquiry probing abuses committed during the country’s ongoing conflict, and working under a mandate from the Geneva-based UN Human Rights Council, issued a report which found that the Syrian Government and opposition forces have perpetuated war crimes and crimes against humanity.

Ms. Gagnon stressed that while both parties had committed human rights violations, it was important to make a distinction on the types of violations incurred by each party.

“We must be clear that the violations were different in scale, gravity and frequency and affecting civilians in different ways,” she said, adding that the Government’s use of heavy weapons in urban areas is affecting civilians “very seriously,” while opposition forces are detaining people illegally in some cases, and executing people who are alleged members of the Government.

As head of the UNSMIS human rights team, Ms. Gagnon met with Government officials, civil society members, community leaders and members of the armed opposition. Initially set up in April for 90 days, the Mission’s mandate was extended by the Security Council until 20 August. 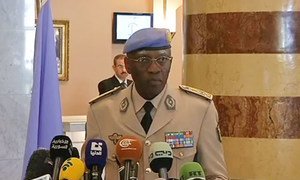 Ahead of the impending end of the mandate of UN observers in Syria, the force's acting head today reiterated his call on the parties to the Middle Eastern country's ongoing conflict to put down their weapons.