30 August 2012
Secretary-General Ban Ki-moon today highlighted the strong partnership between the United Nations and the international grouping of over 100 countries known as the Non-Aligned Movement (NAM), while also stressing the need for both bodies to rise to the challenge of responding to the needs of those they represent.

“Today the United Nations and the NAM face the supreme challenge of answering people’s aspirations,” Mr. Ban said in his remarks to the group’s 16th summit, held in Tehran. “I see two paths for rising to this challenge: prevention to help deal with a society’s political grievances; and sustainability to help address society’s developmental challenges.”

“In some places this has brought transformation and new beginnings, but in others, we see suppression and frustration,” he said. “That is why I have urged world leaders to listen seriously and sincerely. Listen to the appeals of people – for justice, for human rights, for dignity.”

The 16th NAM Summit, under the chairmanship of the Government of Iran, began in the Iranian capital on Sunday and ends on Friday, and is expected to draw representatives from its 120 members, as well as from various associated observer countries.

In his remarks, the UN chief noted that the crisis in Syria started with peaceful demonstrations that were met by ruthless force, and urged all parties to stop the violence now.

“Now, we face the grim risk of long-term civil war destroying Syria’s rich tapestry of communities,” he said. “Those who provide arms to either side in Syria are contributing to the misery. Further militarization is not the answer. The situation cannot be resolved with the blood and the bodies of more than 18,000 people and counting. There should be no more bullets and bombs.”

He also cited the need to tackle challenges such as climate change, women’s empowerment, sustainable development and poverty eradication, as well as the “far too many” political disputes within and between NAM member States, including Sudan and South Sudan, the Democratic Republic of the Congo (DRC), and Mali.

“I urge all NAM members to work within the principles of the UN Charter to resolve disputes peacefully,” Mr. Ban said. “But it is not sufficient to focus on lowering tensions between NAM countries, as important as that is. We must prevent conflict between all UN Member States.

“And from this platform – as I have repeatedly stated around the world – I strongly reject threats by any Member State to destroy another or outrageous attempts to deny historical facts, such as the Holocaust.

“Claiming that another UN Member State, Israel, does not have the right to exist, or describing it in racist terms, is not only utterly wrong but undermines the very principles we have all pledged to uphold.”

The Secretary-General also noted that assuming the leadership of the NAM provides Iran with the opportunity to demonstrate that it can play a “moderate and constructive role” internationally. “That includes responsible action on the nuclear programme which is among the top concerns of the international community,” he stated.

“For the sake of peace and security in this region and globally, I urge the Government of Iran to take the necessary measures to build international confidence in the exclusively peaceful nature of its nuclear programme,” he said, adding that this can be done by fully complying with the relevant Security Council resolutions and cooperating with the UN International Atomic Energy Agency (IAEA).

Mr. Ban said that, in this period of “profound transition,” NAM – which represents nearly two-thirds of the UN’s 193 members – continues to define its evolving identity and address changing notions of sovereignty in an age of interconnectedness.

“You represent diverse societies joined by common goals. I urge you to unite as well to promote and protect the values embedded in the United Nations Charter and the Universal Declaration of Human Rights, including freedom of expression and freedom of association.

“For much of your membership, this internal effort should be the next frontier of action for your people,” said the Secretary-General. “Our organizations must keep pace in changing times. Long-held assumptions may need to change.”

Also addressing the NAM summit today was the President of the General Assembly, Nassir Abdulaziz Al-Nasser, who commended the rich and varied activity of the group, which can help to promote a safer and more stable global environment, while noting that the world is a much more different place than it was when NAM was established 50 years ago.

“You will be asking yourselves how to interact with the new international order as it now stands. I believe that it would be appropriate to examine your role from two standpoints: first, how you relate to one [another] in fulfilling your objectives and, second, how you relate to the other international groups,” President Al-Nasser said. “This high-level meeting provides an opportunity for such a review.”

Secretary-General Ban also spoke at the Iranian Foreign Ministry’s School of International Relations, where he said many human rights challenges remain in Iran. It is especially important for the voices of Iran’s people to be heard during next year’s presidential election, he stated.

He added that this is why he had urged the authorities during his visit to release opposition leaders, human rights defenders, journalists and social activists to create the conditions for free expression and open debate.

Annan appeals to Iraq to disarm and cooperate, says war not inevitable 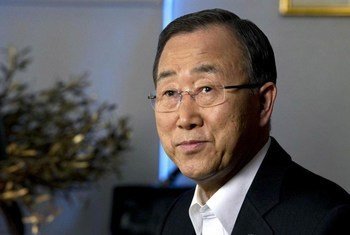 22 August 2012
United Nations Secretary-General Ban Ki-moon will visit Iran at the end of the month to take part in the 16th Summit of the Non-Aligned Movement (NAM), according to his spokesperson.