UN Photo/E. Schneider (file photo)
A mother tells her story about her son, one of the victims known as "desaparecidos" of the military government that ruled Argentina in the late 1970's and early 1980's.
30 August 2012

The practice of enforced disappearances in which citizens of a State are deliberately vanished to never be seen again is not only a heinous crime but an act that negates the very essence of humanity, a group of independent United Nations experts said today.

“Such a practice cannot and should not be tolerated nor justified whether it is used to counter terrorism or fight organized crime or suppress legitimate demands concerning issues such as democracy, freedom of expression or freedom of religion,” stated the Working Group on Enforced or Involuntary Disappearances and the Committee on Enforced Disappearances.

“It is an act that negates the very essence of humanity and is contrary to the deepest values of any society,” they added in their joint statement marking the second International Day of the Victims of Enforced Disappearances.

The International Day was proclaimed by the General Assembly in December 2010, in a resolution which expressed its deep concern over the increase in enforced or involuntary disappearances in various regions of the world.

The UN experts pointed out that 2012 marks the 20th anniversary of the General Assembly’s adoption of the Declaration on the Protection of All Persons from Enforced Disappearance, but voiced concern that the criminal act of vanishing people continued in some countries while others had not yet come to terms with the role enforced disappearances played in their past.

“The practice of enforced disappearances is still used in certain countries to repress individuals and intimidate people claiming their rights,” the experts stated. “In other countries, situations of the past have not been dealt with in an appropriate manner. All families of the disappeared, even though those disappearances occurred decades before, should enjoy the right to truth, the right to justice, and the right to reparation.”

In their statement, the experts also renewed their vow to work towards the elimination of enforced disappearances and emphasized their commitment in bringing truth to the families of the missing.

In addition, they also urged all Member States to commit to the full eradication of the practice and ratify the International Convention for the Protection of All Persons from Enforced Disappearance.

“We have a new Convention to respect and implement. A Convention to bring to life, honouring those who disappeared, and are yet still so present, and we have lives that we can still save,” stated the experts.

In December 2010, the Convention, which was adopted by the General Assembly in 2006, came into force after Iraq became the 20th State to ratify it. The treaty not only outlaws enforced disappearances, but also recognizes the right of all people affected by the crime to know the truth about the circumstances of this crime, the progress and results of the investigation and the fate of the disappeared person.

♦ Receive daily updates directly in your inbox - Subscribe here to a topic.
♦ Download the UN News app for your iOS or Android devices.
disappearance 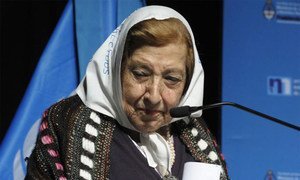 The United Nations today called on all States to end the “heinous crime” of enforced disappearances which has seen countless people vanish into secret prisons or worse, often never to be seen again, in cases of conflict and internal unrest.