“The Secretary-General urges all parties to accept the findings of the Commission and now begin the process of national dialogue aimed at resolving the political problems facing the country,” the spokesperson added in a news briefing at UN Headquarters in New York.

“To that end, he welcomes the start today of high-level political dialogue, and hopes that this leads to national reconciliation and a way of moving forward,” the spokesperson added. “He is concerned at the prospect of renewed political tensions should any side not accept the outcome of the inquiry. He calls on all parties to exercise maximum cooperation and restraint.”

In February, the Maldives’ then-President, Mohamed Nasheed, resigned after days of protests and tensions between the Government and military and police. He was succeeded by his former deputy, Mohammed Waheed Hassan.

In the wake of those events, the Government set up the CoNI, with both the UN and the Commonwealth of Nations providing legal advice to the Commission. “The CoNI was reconstituted in June with international assistance and has since been recognized by all parties as a credible inquiry mechanism,” the spokesperson said.

According to media reports, the CoNI’s report has concluded that former President Nasheed’s resignation was legal, and that he was not forced to step down at gunpoint as had been claimed.

In his news briefing, the UN spokesperson noted that Mr. Ban calls on the parties to respect the Constitution, create a peaceful and transparent environment conducive to dialogue and take steps to strengthen democratic reform and institutions.

“The Secretary-General reaffirms the readiness of the United Nations to extend the necessary support and assistance requested by the parties,” the spokesperson added. 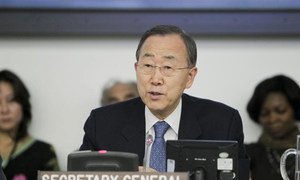 Secretary-General Ban Ki-moon called on all the parties concerned in the Maldives to resolve the current political crisis peacefully and through a national process based on dialogue and consensus.