UNSMIL/I. Athanasiadis
A lone protester holds up a placard condemning the destruction of a Sufi shrine in Tripoli as he approaches the site of the demolition.

28 August 2012
Noting that “destroying places of religious and cultural significance cannot be tolerated,” the head of the United Nations agency tasked with safeguarding the world’s cultural heritage today spoke out against the destruction of various Sufi religious sites in Libya, and called on the perpetrators to cease immediately.

“I am deeply concerned about these brutal attacks on places of cultural and religious significance. Such acts must be halted, if Libyan society is to complete its transition to democracy,” the Director-General of the UN Educational, Scientific and Cultural Organization (UNESCO), Irina Bokova, said in a news release.

“For this, we need dialogue and mutual respect,” she added. “Libya’s future prospects depend on its inhabitants’ ability to build a participatory democracy that respects the rights and the heritage of all its citizens.”

According to media reports, ultra-conservative Islamists damaged major Sufi shrines and libraries in the north-western town of Zliten, the city of Misrata, and the capital, Tripoli, over recent days, reportedly with the acquiescence of members of the security forces.

The affected sites are the Islamic Centre of Sheikh Abdussalam Al-Asmar in Zliten, the Shrine of Sidi Ahmed Zaroug in Misrata, and the Mosque of Sidi Sha'ab in Tripoli. The sites are revered by Sufis, a branch of Islam known for its moderation but considered heretical by some branches of the Islamic faith.

Ms. Bokova also urged the Libyan authorities and society at large to exercise their responsibility in protecting cultural heritage and sites of religious significance for future generations.

In addition, she welcomed the Libyan government’s condemnation of the destruction, and indicated that UNESCO stands ready to provide assistance to protect and rehabilitate them.

Some 2.7 million Libyans took part in the polls to vote for members of the new National Congress. The election was conducted in a largely peaceful manner, receiving praise from international observers and the Security Council. 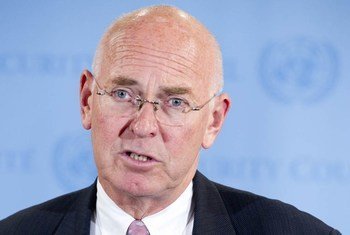 9 August 2012
The United Nations today welcomed Libya’s peaceful transfer of authority from the National Transitional Council to the newly elected National Congress, and reiterated its continuous support to assist the North African country in its democratic transition.