28 August 2012
The United Nations in Somalia today condemned the killing of a humanitarian worker serving with the UN food relief agency in the country’s south.

Yassin Mohamed Hassan, a staff member of the UN Food and Agriculture Organization (FAO) was killed on Monday morning in an attack by an armed group in the Somali port city of Merka.

“The UN reminds all actors in Somalia of the neutral and impartial nature of humanitarian action and appeals to all parties to permit aid workers to continue to safely serve all those in need in the country, wherever they are,” said a statement issued by the Office of the UN Resident and Humanitarian Coordinator for Somalia, Mark Bowden.

“As civilians continue to be the principal victims of ongoing conflict, the UN demands that all parties minimize the impact of conflict on civilians,” the statement added.

After decades of warfare, Somalia has been undergoing a peace and national reconciliation process, with the country recently ending its transitional federal governing arrangements. Until last year, most of the capital, Mogadishu, was, for several years, riven by a fluid frontline dividing the two sides – fighters belonging to the Al Shabaab militant group and troops belonging to the Somalia Government, with the latter supported by the UN-backed African Union Mission in Somalia (AMISOM).

Since the Al Shabaab withdrawal from the capital in August last year, the frontlines have been pushed back to the surrounding area. However, the use of roadside bombs, grenades and suicide bombers still takes place. In addition, Government forces have been on an offensive against the Al Shabaab, which still controls parts of Somalia, primarily in its south-central regions.

According to FAO, the 32-year-old Mr. Hassan, a Somali national, had served with the agency in different capacities for four years and had been in the Merka area as part of a mission that was overseeing irrigation infrastructure rehabilitation works under an FAO programme.

Since August 2011, 20 humanitarian workers have been killed in Somalia while striving to bring relief and support to millions of suffering people, Mr. Bowden’s office noted in its statement.

UN humanitarian agencies and their partners have been helping Somalis deal with the impact of drought, as well as the after-effects of famine in some areas; while famine was officially declared over earlier this year, many Somalis are still in desperate need.

The number of Somalis receiving life-saving aid has more than doubled since July 2011, when famine had been declared, with more than 1.6 million Somalis now receiving food assistance, and 1.7 million people able to access clean water.

According to the UN Office for the Coordination of Humanitarian Affairs (OCHA), national staff members like Mr. Hassan make up more than 90 per cent of humanitarian workers around the world, working on the frontlines, and too often, they bear the brunt of attacks on aid providers.

UN envoy welcomes election of Speaker of Parliament in Somalia 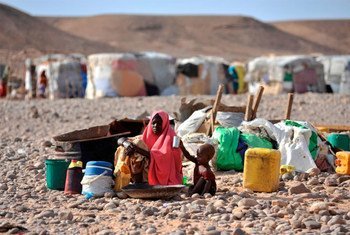 20 July 2012
In spite of the progress made one year after the declaration of famine in parts of southern Somalia, some 3.8 million people there are still in need of assistance, the United Nations said today, appealing to countries to provide funding for humanitarian aid.