The Security Council today reiterated its demand that the group of renegade soldiers known as the 23 March Movement (M23) immediately cease efforts to destabilize the eastern part of the Democratic Republic of the Congo (DRC), and voiced their deep concern at the worsening humanitarian situation in the region.

In a statement to the press, the 15-member body also reiterated its “strong condemnation of the M23 and its attacks,” and urged the mutineers and all armed groups to cease all forms of violence, including acts of sexual violence and the recruitment of children.

The statement follows a closed-door briefing on 30 July by the Secretary-General’s Special Representative, Roger Meece, who also heads the UN peacekeeping mission in DRC (known by the French acronym MONUSCO), which has been assisting the Congolese national forces in their operations against rebel groups.

Mr. Meece briefed Council members on the situation in eastern DRC and specifically on the attacks perpetrated by the M23 – composed of renegade soldiers who mutinied in April and are reportedly led by Bosco Ntaganda, an army general wanted by the International Criminal Court (ICC) for war crimes – including the imminent threat to the city of Goma, the capital of the eastern province of North Kivu.

Council members “reiterate their demands that the M23 cease immediately all destabilizing activities, including any advances towards the city of Goma.”

They also reiterated their strong condemnation of “any and all outside support” to the M23 and demanded that all support to the armed group, including from outside countries, cease immediately.

The fighting in eastern DRC has uprooted nearly half a million people over the past four months, including some 220,000 people in North Kivu province, 200,000 in South Kivu province, and more than 51,000 who have fled to neighbouring Uganda and Rwanda.

“The members of the Security Council express deep concern at the worsening humanitarian situation in the North Kivu province of the DRC, especially the increasing number of displaced persons and refugees, and call on the international community to provide appropriate humanitarian support,” the statement added. 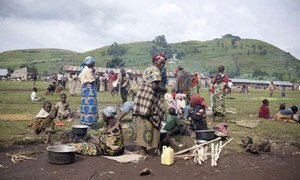 The United Nations refugee agency today condemned rampant abuse against civilians in the eastern parts of the Democratic Republic of the Congo (DRC), amid fighting that has uprooted nearly half a million people over the past four months.