FAO/WFP/JRFSNA report
A returnee from Daará in Al Hassake collects garbage to sustain his livelihood.

2 August 2012
Nearly three million Syrians need food, crops and livestock assistance, according to a recent assessment carried out by the United Nations and the Syrian Government.

Carried out by the UN World Food Programme (WFP), the UN Food and Agriculture Organization (FAO) and Syria’s Minister of Agriculture and Agrarian Reform in June, the Joint Rapid Food Security Needs Assessment mission’s report stresses that out of the three million Syrians in need of assistance, 1.5 million are in urgent need of food aid over the next three to six months, especially in areas that have seen the greatest conflict and population displacement.

Syria has been wracked by violence, with more than 10,000 people, mostly civilians, killed since the uprising against President Bashar al-Assad began some 16 months ago. Over recent days, there have been reports of an escalation in violence in many towns and villages, as well as the country’s two biggest cities, Damascus and Aleppo.

The joint mission’s report estimates that Syria’s agricultural sector has lost $1.8 billion as a result of the ongoing conflict. The crisis has led to damage to crops, livestock and irrigation systems. Basic crops such as wheat and barley have been badly affected, as well as cherry and olive trees and vegetable production.

“While the economic implications of these losses are quite grave, the humanitarian implications are far more pressing,” said WFP’s Representative in Syria, Muhannad Hadi. “The effects of these major losses are first, and most viciously, felt by the poorest in the country. Most of the vulnerable families the mission visited reported less income and more expenditure – their lives becoming more difficult by the day.”

The assessment mission’s report also notes that large numbers of rural people of Syria’s central, coastal, eastern, north-eastern and southern governorates were found to have totally or partially lost their farming assets and livestock-based livelihoods and businesses, due to the ongoing political crisis and insecurity, combined with a prolonged drought.

“The most vulnerable families in Syria depend entirely or partly on agriculture and farm animals for food and income. They need emergency support, like seeds, repairs to irrigation systems, animal feed and healthcare,” said the FAO Representative in Syria, Abdulla BinYehia. “If timely assistance is not provided, the livelihood system of these vulnerable people could simply collapse in a few months’ time. Winter is fast approaching and urgent action is needed before then.”

Living conditions for farmers have become increasingly difficult, according to the assessment mission, with farmers being forced to leave crops unattended due to unavailability of labour, rise in fuel costs, insecurity and power cuts affecting water supply, augmenting the risk of losing crops if assistance is not provided.

Close to one million people are in need of seeds, food for animals, fuel and repair of irrigations pumps, the assessment says, stressing that particular attention needs to be given to female-headed households, migrant workers and small farmers.

WFP’s Mr. Hadi said that during the assessment mission’s visit to Al Hassakeh governorate in the country’s north-east, “even the richest family in a village reported having food stock for only one more month.”

Yesterday, WFP announced that it would scale up its emergency operation for Syria, which began in October, to reach 850,000 people this month and access badly affected areas. However, the operation is still facing a funding shortfall of about $62 million out of an overall budget of $103 million.

Meanwhile, FAO, which has provided assistance to some 82,000 people since December, aims to reach 900,000 people in rural households over the next six months to ensure they can continue planting and keeping their livestock. A budget of $38 million will be required for this, the agency said. 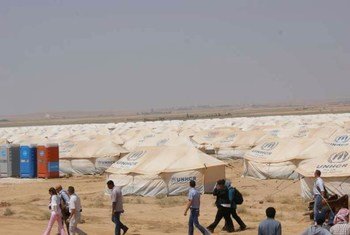 1 August 2012
As the United Nations prepares to deliver food relief to people in Aleppo, the UN observer mission in the country renewed its call for the Government and the opposition to refrain from further violence after reports of an increase in fighting and the use of heavy weaponry in the city over the past 72 hours.