UNHCR/L. Taylor
Young forcibly-displaced Roma from south-east Europe. Many have no citizenship which affects their daily lives.

2 August 2012
Two independent United Nations human rights experts today called on all countries, particularly those with Roma communities, to confront modern-day hatred, violence and discrimination against this group and find solutions to their persistent exclusion.

Their comments come on Roma Holocaust Remembrance Day, or ‘Pharrajimos’ in the Romani language, which is observed each year on 2 August. Some 3,000 Roma and Sinti were murdered on the night of 2-3 August 1944, when the “Gypsy” camp in the Auschwitz-Birkenau concentration camp complex was liquidated by the Nazi regime.

The UN Independent Expert on minority issues, Rita Izsák, who is herself of Hungarian Roma origin, said not enough was being done to challenge “a rising tide of hostility and discrimination against Roma in Europe that shames societies.”

Ms. Izsák, whose personal experience with racism and discrimination has inspired her work for minority rights, urged States to take a zero-tolerance stance against acts of anti-Roma extremism, hatred and violence, according to a news release issued by the Office of the UN High Commissioner for Human Rights (OHCHR).

In addition, the UN Special Rapporteur on contemporary forms of racism, racial discrimination, xenophobia and related intolerance, Mutuma Ruteere, called for increased awareness and action to tackle these issues.

“The teaching in schools of the history of Roma, including the genocide they suffered during the Nazi regime, and awareness-raising measures to inform and sensitise populations about Roma identity and culture are essential to address the persistent prejudices that fuel racism and intolerance against them,” Mr. Ruteere said.

“There must also be a stronger message that Roma are a valued part of societies – not only in words, but in concrete actions – to protect Roma and improve their living conditions and inclusion,” he added.

The experts, who report to the UN Human Rights Council in Geneva in an independent and unpaid capacity, hailed efforts and initiatives under the 2011 European Union Framework for National Roma Integration Strategies.

Under the Framework, EU member countries have agreed to prepare national Roma inclusion strategies, or integrated sets of policy measures within their broader social inclusion policies for improving the situation of Roma.

Estimates suggest that up to 12 million Roma live in Europe, and other sizeable Roma populations live in Latin America and other regions, most of them on the margins of society. 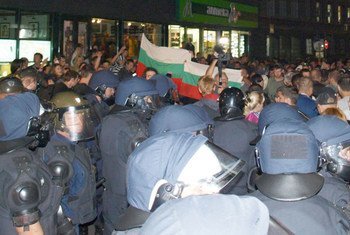 4 October 2011
The United Nations human rights office today voiced deep concern about the anti-Roma demonstrations and accompanying hate speech that have been occurring in Bulgaria, and called on authorities to combat discrimination and protect minority groups.