27 July 2012
Secretary-General Ban Ki-moon today urged countries to follow through with the Olympic Truce, and highlighted the role of sport in promoting peace, dialogue and development.

“That is the message of the Olympic Truce. That is the dream on which the United Nations is built, and the goal of our daily work,” he added.

Based on the ancient Greek tradition whereby athletes, artists, their relatives and pilgrims could travel safely to the Olympic Games and afterwards return home safely, the Olympic Truce called for the cessation of all conflicts during the sports event.

The modern-day version of the Truce has been promoted annually through a General Assembly resolution since 1993, and it was extended to the Paralympic Games for disabled athletes in 2006.

“The Truce may sound like something from the distant past that has no place in our times,” Mr. Ban said. “It may seem naive to think that hardened fighters and their patrons will listen, but relevant it is, and try we must.”

Mr. Ban said he was particularly concerned with the situation in Syria and the escalating violence in the city of Aleppo, and urged the Syrian Government to halt their offensive. “The violence from both sides must stop for the sake of the suffering civilians of Syria,” he said.

In addition, the UN chief emphasized that the Olympics should remind nations of the power of sport and physical activity as an investment in better health, education and skills, as well as a way to build inclusive and tolerant societies.

“We often take sport, play and leisure for granted, yet millions of people around the world do not have access to sports, or are actively denied their right to participate,” Mr. Ban said. “I call on all Governments and sport organizations to provide opportunities for sport, physical activity and play. This is not a luxury. It is an investment in better health, education and skills for coming generations – critical for building inclusive societies grounded in mutual tolerance and respect.”

He added, “When you see the magic that a ball can create among children in a shantytown or refugee camp, you see potential that we must harness.”

Yesterday, Mr. Ban participated in the Olympic Torch relay in Central London. He described the experience as “an extraordinary honour” and praised the United Kingdom for its organization of the event, as well as its own efforts to “give life to the Truce with social and development projects at home and abroad.” 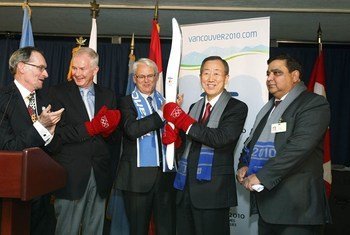 24 July 2012
Secretary-General Ban Ki-moon will head later this week to London, where he will take part in the torch run for the 2012 Summer Olympic Games on Thursday and attend the opening ceremony on Friday, his spokesperson announced today.