27 July 2012
Expressing “deep alarm” over the increased threat to civilians in Syria, the United Nations human rights chief today urged the country's Government and armed opposition to protect civilians and abide by their obligations under international human rights and humanitarian law – or face the consequences.

“The Government has the prime responsibility to protect civilians from all forms of violence,” the UN High Commissioner for Human Rights (OHCHR), Navi Pillay, said in a news release. “While Government forces have on some occasions, in accordance with international humanitarian law, given civilians a clear opportunity to leave areas it is attacking, on other occasions it has not. Effective warning is required by international humanitarian law.”

“Civilians and civilian objects – including homes and other property, businesses, schools and places of worship – must be protected at all times. All parties, including the Government and opposition forces, must ensure that they distinguish between civilian and military targets,” she added.

Syria has been wracked by violence, with more than 10,000 people, mostly civilians, killed since the uprising against President Bashar al-Assad began some 16 months ago. Over recent days, there have been reports of an escalation in violence in many towns and villages, as well as the country's two biggest cities, Damascus and Aleppo.

Ms. Pillay expressed particular concern about the likelihood of an imminent major confrontation in Aleppo, Syria's second-largest city after the capital, Damascus.

“I have been receiving as yet unconfirmed reports of atrocities, including extra-judicial killings and shooting of civilians by snipers, that took place during the recent fighting in various suburbs of Damascus,” she said. “It goes without saying that the increasing use of heavy weapons, tanks, attack helicopters and – reportedly – even jet fighters in urban areas has already caused many civilian casualties and is putting many more at grave risk.”

She noted that the consequences for civilians have been devastating, with between one million and 1.5 million people reported to have fled their homes, in addition to those killed and injured.

The High Commissioner said “a discernible pattern has emerged” as Government forces try to clear areas it says are occupied by opposition forces.

“Typically, during the initial stages, after a village or urban district has been surrounded, water, electricity and food supplies are cut. This is followed by intense shelling and bombardment by a variety of weaponry, increasingly with air support from attack helicopters, and now reportedly even jet aircraft. Then tanks move in, followed by ground forces who proceed door-to-door and reportedly often summarily execute people they suspect of being opposition fighters, although sometimes they detain them,” she said. “The bodies of those executed or otherwise killed are then sometimes burned or taken away.”

Ms. Pillay also said she had had also been receiving an increasing number of reports of opposition fighters torturing or executing prisoners.

“Murder and wilful killing, whether committed by government or opposition forces, may constitute crimes against humanity or war crimes. Torture, likewise, is prohibited under all circumstances,” she said. “While such conclusions can only ultimately be reached in a court of law, it is my belief, on the basis of evidence gathered from various credible sources, that crimes against humanity and war crimes have been, and continue to be, committed in Syria.”

“Those who are committing them should not believe that they will escape justice. The world does not forget or forgive crimes like these,” she added. “This applies to opposition forces committing crimes as well as to Government forces and their allies.” 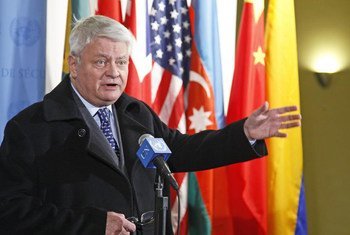 26 July 2012
The United Nations is not packing up and going home, the world body’s top peacekeeping official told reporters in the Syrian capital today, noting that the observers sent home this week could be recalled if circumstances in the country change.