Secretary-General Ban Ki-moon today paid his respects to the victims of Srebrenica and called on the world to learn the lessons from the 1995 massacre and stop the ongoing bloodshed in Syria.

“We must learn from the lessons of Srebrenica,” Mr. Ban said as he visited the memorial site for the 8,000 Muslim men and boys who were killed by Bosnian Serb forces who overran Srebrenica – the largest such massacre on European soil since the founding of the United Nations.

“The international community failed to provide the necessary protection to many people who were killed at the time when they needed our support,” he added.

Mr. Ban said that world leaders in 2005 finally came up with the principle of the “Responsibility to Protect,” which holds States responsible for shielding their own populations from genocide, war crimes, ethnic cleansing, and related crimes against humanity and requires the international community to step in if this obligation is not met.

The international community has been able to apply this principle in some places, such as in Libya and Côte d’Ivoire, he noted.

“But in many other places, we are not still able to fully protect civilians,” he stated, drawing attention to the crisis in Syria, where more than 10,000 people, mostly civilians, have been killed and tens of thousands displaced since the uprising against President Bashar al-Assad began some 16 months ago.

“The international community must be united not to see any further bloodshed in Syria because I do not want to see any of my successors, after 20 years, visiting Syria, apologizing for what we could have done now to protect the civilians in Syria – which we are not doing now,” said the Secretary-General.

“This was the first such trip by a United Nations Secretary-General and it was a remarkable journey,” Mr. Ban said at a wrap-up press conference in Sarajevo, the capital of Bosnia and Herzegovina.

“I leave with a deeper understanding of the region – and a greater appreciation for its challenges and its potential,” he stated, adding that he is “deeply impressed” with the resilience, dynamism and commitment he witnessed.

“The region has come such a long way from 20 years ago when war ravaged these lands. Today, it is looking to a shared future based on steadily improving relations and cooperation.”

Mr. Ban added that the UN stands ready to help the region build on its progress and overcome its challenges for shared progress and prosperity for all.

♦ Receive daily updates directly in your inbox - Subscribe here to a topic.
♦ Download the UN News app for your iOS or Android devices.
Srebrenica 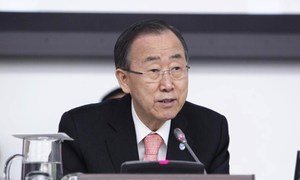 Highlighting the progress that Bosnia and Herzegovina has made over the past two decades, Secretary-General Ban Ki-moon today affirmed the support of the United Nations in the country’s path to stability and prosperity.