25 July 2012
Highlighting the progress that Bosnia and Herzegovina has made over the past two decades, Secretary-General Ban Ki-moon today affirmed the support of the United Nations in the country’s path to stability and prosperity.

“The United Nations remains your partner, including in your EU [European Union] reform process, which your constituents and international partners hope to see accelerated,” Mr. Ban said in an address to the country’s Parliamentary Assembly, referring to consensus amongst the country’s leaders that European integration is the best route for ensuring its future stability and prosperity.

“We strongly support the reinforced EU presence in Bosnia and Herzegovina as embodied by the office of the EU Special Representative,” Mr. Ban added.

The UN chief – who is visiting South-East Europe – also noted the progress achieved by Bosnia and Herzegovina over the last two decades, including its transformation from a country which hosted UN peacekeepers to a troop contributor to UN peacekeeping operations, and from occupying the agenda of the Security Council to successfully serving on the Council.

Bosnia and Herzegovina was the scene of heavy fighting during the ethnic conflicts that plagued the region in the 1990s. Fighting there came to an end in October 1995, with UN peacekeepers monitoring a ceasefire put in place to allow for peace negotiations to be launched – those negotiations led to the signing of the Dayton Peace Agreement in December 1995.

In 2004, a European Union stabilization force – known by the acronym EUFOR – took over peacekeeping responsibilities from a stabilization force led by the North Atlantic Treaty Organization (NATO). EUFOR was tasked with ensuring that all sides continue to comply with the Peace Agreement, and, in November last year, the Security Council extended EUFOR’s mandate for another 12 months.

In his remarks to the Parliamentary Assembly, Mr. Ban said the UN would continue to support Bosnia and Herzegovina’s efforts to advance development and reconciliation in the country.

“Led by your priorities and direction, we are working together to create jobs especially for young people, extend social protection for the most vulnerable groups, end the suffering of those enduring protracted displacement, safeguard the environment, tackle discrimination and promote respect for human rights and the rule of law,” Mr. Ban said, noting that the rule of law is the essential framework for stability and certainty which underpins the transition to lasting peace.

In an earlier meeting with the Members of the country’s Presidency, Mr. Ban said he had pledged the full support of the UN for dialogue and confidence-building within Bosnia and Herzegovina.

“Dialogue and regional cooperation are also essential to address more difficult, outstanding issues such as coordination in war crimes trials and investigations, as well as support for victims and witnesses,” the Secretary-General said. “Leaders must summon the courage and the foresight to move beyond competing accounts of past events to shape a common history – this is crucial for consolidating peace and moving the country forward.”

On Thursday, Mr. Ban noted, he will visit Srebrenica to pay his respects to the victims of the notorious massacre that took place there in July 1995. More than 7,000 Muslim men and boys were killed by Bosnian Serb forces after they took over Srebrenica, which at the time had been designated a safe haven.

“In a tragedy of such epic proportions, there was so much blood and so much blame. The United Nations did not live up to its responsibility. The international community failed in preventing the genocide that unfolded,” the Secretary-General said. “But we have learned from the horror, and we are learning still.”

Mr. Ban said the events at Srebrenica helped bring about a new international resolve for justice, accountability, for a responsibility to protect civilians.

“Together with our Member States, we are doing more to prevent atrocities. We are bringing perpetrators to justice. We are caring for victims of sexual violence. And we are working to match words with deeds,” he said. “Quite simply, we must do better in seeing atrocities coming and telling it like it is.”

The Secretary-General has spent the past days in South-East Europe, promoting the partnership between the United Nations and the region, as well as discussing common challenges and future opportunities. Bosnia-Herzegovina is the last stop on his trip – earlier, he visited Slovenia, Croatia, Serbia, Montenegro, Kosovo, and the former Yugoslav Republic of Macedonia. 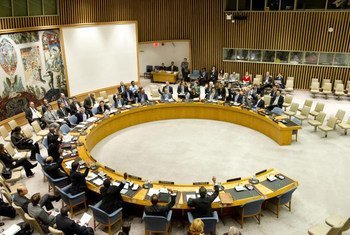 16 November 2011
The Security Council today extended for another year the European Union stabilization force (EUFOR) that is tasked with ensuring that all sides continue to comply with the 1995 Dayton Peace Agreement that ended fighting in Bosnia and Herzegovina.