The frequent use of injections can add to the risk of Hepatitis infection. IRIN/Kamila Hyat

“The vast majority of people infected with hepatitis are unaware, undiagnosed and untreated,” said Dr. Sylvie Briand, of the World Health Organizations’ (WHO) Pandemic and Epidemic Disease Department. “Only by increasing awareness of the different forms of hepatitis, and how they can be prevented and treated, can we take the first step towards full control of the disease and save thousands of lives.”

Viral hepatitis is an inflammation of the liver that kills about one million people every year. In addition, an estimated 500 million people experience chronic illness from their infection with hepatitis; and, it is a major cause of liver cancer and liver cirrhosis, according to WHO.

This year’s World Hepatitis Day falls on Saturday. In 2010, given the scale of the epidemic, with one in 12 people infected, and recent advances in prevention and treatment, the World Health Assembly – the decision-making body of WHO – designated 28 July as World Hepatitis Day. The Day serves to promote greater understanding of hepatitis as a global public health problem and to stimulate the strengthening of preventive and control measures against infection in countries throughout the world.

Despite its toll on health, hepatitis remains a group of diseases that are largely unknown, undiagnosed and untreated, WHO has noted.

The theme of this year’s observance is ‘It’s closer than you think’ and focuses on raising awareness of the different forms of hepatitis: what they are and how they are transmitted; who is at risk; and the various methods of prevention and treatment.

In preparation for this year’s Day, WHO is launching a new global framework to tackle the disease. The Prevention and control of viral hepatitis infection: Framework for global action describes four areas of work to prevent and treat hepatitis infection, and is aimed at guiding the development of regional and country-specific strategies.

The four areas of work are raising awareness, together with promoting partnerships and mobilizing resources; transforming scientific evidence into policy and action; preventing transmission; and screening, care and treatment.

There are five hepatitis viruses defined by types – type A, B, C, D and E. Types B and C are of significant concern since a high proportion of people infected with these viruses may not experience symptoms at the early stage of the disease, and only become aware of their infection when they are chronically ill. This can sometimes be decades after infection.

In addition, types B and C are the leading cause of liver cirrhosis and cancer, accounting for almost 80 per cent of all liver cancer cases, according to WHO, which also notes that people can get hepatitis from either infected bodily fluids or contaminated food and water, depending on the type of hepatitis. 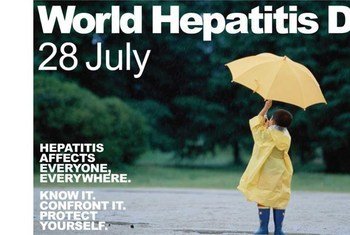 27 July 2011
The United Nations tomorrow will mark World Hepatitis Day for the first time to bring attention to the disease that affects almost one in every three persons on Earth.