19 July 2012
Addressing the Security Council today, the top United Nations envoy in Iraq today highlighted the key role played by the UN Mission in the country, stressing that there is still much to be done to improve the political, economic, and social situation in the Middle Eastern nation.

“UNAMI is needed more than ever to help Iraq complete its transition to a stable and prosperous democracy,” the Special Representative of the Secretary-General and head of the UN Assistance Mission for Iraq (UNAMI), Martin Kobler, told the Council.

“UNAMI has the legitimacy and standing to represent the international community in Iraq. Iraqis from all communities look to UNAMI to protect their aspirations and to ensure their needs are met,” he added.

Mr. Kobler praised Iraq's progress over the past year, but warned that this could be threatened by the “seven-month long stalemate between the political blocs,” which he said is hampering progress in the country's development.

In particular, the envoy noted, it is impeding the fundamental legislation such as the establishment of a Federation Council, the strengthening of the judicial system, and the protection of minorities, among others.

“Making progress in unblocking Iraq's unfinished legislative agenda requires an agreement between Iraq's political leaders that will end the political stalemate. Such an agreement must be reached through transparent and inclusive dialogue in respect of the Constitution, and in the spirit of compromise,” Mr. Kobler said.

He emphasized that UNAMI would continue to assist Iraq in strengthening the rule of law and boosting protections for human rights, as well as addressing issues of poverty, high unemployment, and lack of basic services which continue to affect large sections of the population.

“It is vital that Iraqis, in particular vulnerable groups, be provided with better access to basic services, social welfare and community development programmes, and opportunities for education,” Mr. Kobler said.

The Special Representative also highlighted UNAMI's work supporting programmes aimed at increasing youth participation in social, political and economic spheres, as well as supporting civil society groups so they can have a stronger role in ensuring democratic space and freedoms.

The envoy voiced concern about the delay in the relocation of the residents of Camp New Iraq – formerly known as Camp Ashraf – to a new location, Camp Hurriya, prior to their resettlement in third countries.

“Time is running out to find a sustainable situation,” Mr. Kobler said, urging the Camp Ashraf residents to cooperate with the Iraqi authorities and to relocate. He also urged Member States to offer resettlement to eligible former Ashraf residents, as “without prospect for resettlement the ongoing process runs the risk of collapsing.”

Through UNAMI's facilitation, about two thirds of the residents have moved to the new location in the past months, but 1,200 residents still remain in Camp Ashraf. 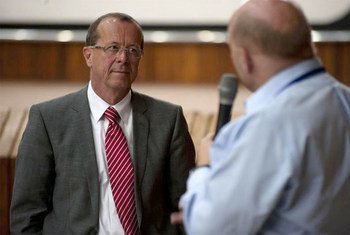 30 May 2012
The human rights situation in Iraq remains fragile as the country continues its transition to peace and democracy after years of violence, according to a United Nations report released today, noting that Government efforts to protect and promote the rights of its citizens need to be increased.