FAO
Tomato is the most economically important crop in the Near East region.
19 July 2012

The United Nations food agency today announced it is stepping up its response to stop a tomato-eating moth from destroying the crops in the Near East, emphasizing that programmes to control this pest have already proved successful in Mediterranean and North African countries.

“The tomato borer has bred quickly and moved easily across borders. Some countries have been able to minimize the insect’s ability to reproduce, and limit its potential to spread and damage crops,” said the Food and Agriculture Organization’s (FAO) pest management expert, Khaled Alrouechdi. “FAO’s objective is to replicate this success as the pest makes its way east and southeast.”

In a news release, FAO said planning is currently underway for a sub-regional project to manage the tomato borer in Egypt, Iran, Iraq, Jordan, Lebanon, Syria and Yemen, drawing on techniques used most recently in various Mediterranean countries.

The tomato borer, also known as Tuta absoluta, is a small, brownish moth that was first introduced from South America into Spain in 2006, and later spread to countries in the Mediterranean Basin and the Near East – encompassing territories as far north as Switzerland, as far south as Morocco and Algeria, as far east as Turkey, and also Arab Gulf states to the southeast.

Tuta absoluta feeds on various plants in the nightshade family such as potato, eggplant, pepper, common beans, and some related weeds, but the tomato is the most economically important crop in the region.

To combat the pest, FAO uses a scheme that involves low-toxic and affordable techniques, reducing the use of heavy chemical pesticides, and favouring the use of natural enemies and ‘attract-and-kill’ pheromone traps.

“There are two reasons why we aim to reduce the level of pesticides used: first, the heavy application of chemicals is not environmentally sustainable. Second, the tomato borer has been known to rapidly develop resistance to insecticides,” Mr. Alrouechdi said. 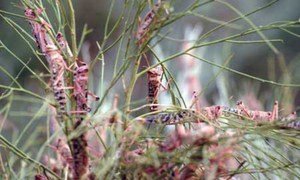 The desert locust threat to Mali and Niger’s croplands continues to grow as swarms of the insects have arrived to the northern parts of both countries, the United Nations food agency warned today.