Expressing concern over the situation in the eastern Democratic Republic of the Congo (DRC), Secretary-General Ban Ki-moon deeply regrets the death of a United Nations peacekeeper killed in a recent armed clash there, his spokesperson said today.

Serving with the UN Organization Stabilization Mission in DRC (MONUSCO), the Indian ‘blue helmet’ had been in Bunagana, in the province of North Kivu, this week, when he was caught in a cross-fire in clashes between the DRC’s armed forces and a rebel group known as the M23.

The DRC’s eastern provinces of North and South Kivu have witnessed increased fighting between Government troops and the M23, which is composed of renegade soldiers who mutinied in April and are led by Bosco Ntaganda. The fighting has displaced more than 100,000 people, including many who have fled to neighbouring Rwanda and Uganda.

“The Secretary-General expresses his serious concern about the situation in eastern DRC, and calls for an immediate end to all violence perpetrated by armed groups,” Mr. Ban’s spokesperson said. He added that the Secretary-General extends his condolences to the family of the victim and to the Government and people of India.

In a press statement, also issued on Friday, the Security Council condemned in “the strongest terms” the attacks by M23 on MONUSCO peacekeepers in North Kivu on 5 July, which resulted in the peacekeeper’s death, as well as that of DRC soldiers and the displacement of thousands of civilians.

The Council members also expressed their sympathy to the family of the victim and MONUSCO staff, as well as to the Government of India.

“They called upon the Government of the Democratic Republic of the Congo to ensure that the perpetrators of such attack are swiftly brought to justice. They reiterated their demands that the M23 and all armed groups immediately cease all forms of violence,” the statement added.

The UN High Commissioner for Human Rights, Navi Pillay, has previously described the M23 group as being led by a “particularly notorious group of human rights violators.”

“Many of them have appalling track records including allegations of involvement in mass rape, and of responsibility for massacres and for the recruitment and use of children,” Ms. Pillay said in June. “Many of them may have been responsible for war crimes – I fear the very real possibility that they will inflict additional horrors on the civilian population as they attack villages in eastern DRC.”

In late June, the Security Council extended MONUSCO for another year, focussing on its priority mandate of protecting civilians. It also urged national authorities to reform their security sector and end armed insurgencies and human rights abuses in the country.

MONUSCO supports the DRC authorities in their stabilization and peace consolidation efforts, including assisting with the holding of elections, the monitoring of human rights violations and support for Government action against armed groups operating in the country’s east. 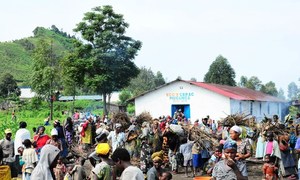 The United Nations human rights chief today expressed deep concern over the safety of civilians living in the eastern Democratic Republic of the Congo (DRC), as fighting continues between the DRC national army and the M23 movement, an armed group led by a “particularly notorious group of human rights violators.”