OCHA/Imane Cherif
Thousands of people have been displaced by fighting in North Kivu, Democratic Republic of the Congo.
19 June 2012

The United Nations human rights chief today expressed deep concern over the safety of civilians living in the eastern Democratic Republic of the Congo (DRC), as fighting continues between the DRC national army and the M23 movement, an armed group led by a “particularly notorious group of human rights violators.”

“The leaders of the M23 figure among the worst perpetrators of human rights violations in the DRC, or in the world for that matter,” the UN High Commissioner for Human Rights, Navi Pillay, said in a news release. “Many of them have appalling track records including allegations of involvement in mass rape, and of responsibility for massacres and for the recruitment and use of children.”

“Many of them may have been responsible for war crimes – I fear the very real possibility that they will inflict additional horrors on the civilian population as they attack villages in eastern DRC,” she added.

The DRC’s eastern provinces of North and South Kivu have witnessed increased fighting between government troops and M23’s renegade fighters, following a mutiny by soldiers in April. The renegades had formerly belonged to armed groups which were integrated into the DRC armed forces (known by the French acronym FARDC) following a 2009 peace agreement.

Late last week, the Security Council strongly condemned the soldiers’ mutiny, as well as the killing and abuse of civilians, mostly women and children, carried out by armed groups such as M23. The fighting has displaced more than 200,000 people in eastern DRC, including many who have fled to neighbouring Rwanda and Uganda.

According to Ms. Pillay’s office (OHCHR), M23’s senior leadership includes Sultani Makenga, a colonel and former rebel leader alleged to have been involved in civilian killings and the recruitment of children for use in combat, and Bosco Ntaganda, an army general wanted by the International Criminal Court (ICC) on charges of war crimes for recruiting and using children in combat in the DRC’s north-eastern district of Ituri in 2002-2003.

“Every effort must be made to hold these men, and the soldiers under their command, accountable for human rights violations committed against civilians – both for crimes committed within the context of the current mutiny, and also for offences committed previously,” Ms. Pillay said.

The human rights chief expressed particular concern that the practice of recruiting and using children has been maintained until very recently. She pointed to a recent case where peacekeepers from the UN Stabilization Mission in the DRC (MONUSCO) succeeded in rescuing 20 minors from a regiment of the FARDC, previously under the command of Colonel Innocent Zimurinda, a current M23 member and former armed group commander. The children had been recruited in North Kivu province between 2008 and January 2012.

Ms. Pillay called on all parties, including the FARDC, to respect international humanitarian and human rights law and to take all necessary measures to ensure the protection of the civilian population. 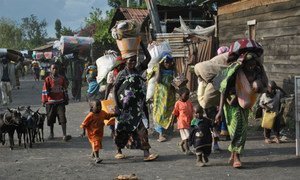 The Security Council today strongly condemned the recent mutiny by renegade soldiers in the Democratic Republic of the Congo (DRC), as well as the killing and abuse of civilians, mostly women and children, by armed groups operating in the eastern part of the country.