Secretary-General Ban Ki-moon today voiced sadness at the death of Dr. J. Michael Adams, President of the International Association of University Presidents, paying tribute to the late scholar who was also a friend of the United Nations and its chief.

Dr. Adams, who was also President of Fairleigh Dickinson University in New Jersey, died this morning following an illness, according to media reports.

“Dr. Adams was a strong United Nations champion and partner, and a personal friend,” said a statement issued by Mr. Ban’s spokesperson. “The eloquence of Michael Adams’ scholarship and writing had a democratic, inter-generational appeal which brought the power and promise of the United Nations home to so many in a world whose globalization he saw as a resource of strength and possibility. He will be deeply missed.”

The statement added that Dr. Adams brought his wisdom and energy, and that of the institutions he led, to serve the greater global cause, in particular, through his contribution to the UN Academic Impact.

Launched in November 2010, the Academic Impact is a global initiative that aligns institutions of higher education with the UN to actively support universally accepted principles in human rights, literacy, sustainability and conflict resolution, among others.

♦ Receive daily updates directly in your inbox - Subscribe here to a topic.
♦ Download the UN News app for your iOS or Android devices.
academic 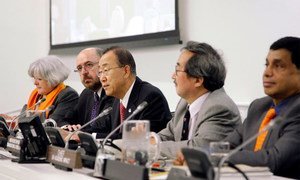 Over 300 university presidents, faculty members and students gathered at United Nations Headquarters today for the launch of a new initiative that seeks to create partnerships between the world body and academia and foster a culture of intellectual social responsibility.