IRIN/David Swanson
There are 28,000 documented Rohingya refugees in Bangladesh, including these boys at the Kutupalong refugee camp.

15 June 2012
The United Nations top envoy for Myanmar has called for an investigation into violence that recently took place in the country’s Rakhine state.

“The Special Adviser [Vijay Nambiar] calls for a full, impartial, and credible investigation of the disturbances to be conducted urgently as well as to ensure that the rule of law is enforced in a transparent manner,” according to a UN news release.

The Secretary-General’s Special Adviser for Myanmar, Vijay Nambiar, was in the south-east Asian nation to participate in a meeting of the Peace Donor Support Group, as well as meet with government leaders, including President Thein Sein, in the capital, Naypyitaw.

While there, serious disturbances occurred in Rakhine state, in the country’s west, which led to the Government declaring a state of emergency there. The UN also temporarily relocated, on a voluntary basis, some of its staff based in the towns of Maungdaw and Buthidaung, as well as Rakhine state’s capital, Sittwe.

According to media reports, the violence in Rakhine state, between ethnic Rakhine Buddhists and Rohingya Muslims, left at least a dozen civilians dead and hundreds of homes destroyed since last Friday.

Mr. Nambiar and the UN Resident and Humanitarian Coordinator, Ashok Nigam, travelled to Maungdaw, with a Government minister. There, they accompanied the minister on a visit to camps of the internally displaced persons (IDPs), where the Special Advisor expressed concern and sympathy for their situation, and assured the support of the United Nations.

The UN officials were informed that around 15,000 people had been internally displaced in Rakhine state. On Friday, the office of UN Resident and Humanitarian Coordinator Nigam said these numbers are now reported to be over 30,000.

The team of UN officials also had an opportunity to review the situation with the aim of responding to the request from the Government for urgent humanitarian assistance for the affected people in Maungdaw, Buthidaung and Sittwe – the Government has indicated that food, shelter and medical assistance are urgently required.

According to UN Resident and Humanitarian Coordinator Nigam’s office, the UN will conduct both a security and needs assessment to respond rapidly to the needs of the people, including the deployment of staff to Rakhine state.

“The UN will work with the Government and its humanitarian partners to meet these needs,” the Resident Coordinator’s office said in a news release. “Already more than 400 bags of rice have been distributed in the last two days.”

“Additional food is being distributed by the UN to all the people in need in accordance with UN procedures which require food to be distributed according to the humanitarian principles of impartiality and neutrality,” it added.

In his meetings with President Sein, Mr. Nambiar discussed the state of emergency and the need for the Government to continue to handle the situation transparently and with respect for human rights and the rule of law, consistent with recent comments from the President, in order that the cycle of violence is broken and the country’s broader reform process is not adversely affected.

Mr. Nambiar’s visit followed the one made by Secretary-General Ban Ki-moon in late April, during which he pledged the UN’s continued support for Myanmar as it continues with the process of national reconciliation and democratic transition begun last year by President Sein.

Separately on Friday, the Office of the UN High Commissioner for Refugees (UNHCR) said it was deeply concerned about the welfare of people fleeing violence in Rakhine state and appealed to Bangladesh to offer safety and shelter.

“UNHCR recognizes that, for years, Bangladesh has been bearing the brunt of the forced displacement caused by earlier crises in Myanmar. The latest events pose new challenges and UNHCR hopes that Bangladesh will respond in line with the country's long history of compassion and solidarity,” UNHCR said in a news release.

The refugee agency said it “has first-hand, credible accounts of boats from Myanmar not being enabled to access Bangladeshi waters. These reports indicate women, children and some wounded are on board.”

It added that there were now a number of boats drifting in the mouth of the Naf River, which marks the Bangladesh-Myanmar border, and that there were “desperate people on board in need of water, food and medical care. It is vital that these people are allowed access to a safe haven and shelter.”

UNHCR said that it is encouraged by statements by Myanmar senior officials, including from President Sein, aimed at defusing the situation and appealing for calm, patience and restraint. 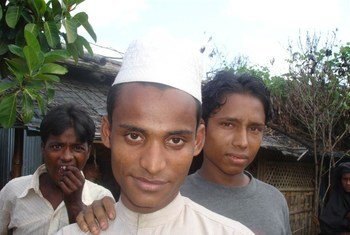