UN Photo/F. Soto-Nino
Members of the Rio+20 Preparatory Committee at the opening of their last session before the Conference starts next week.

13 June 2012
Countries today started the last round of talks to come to an agreement on the draft outcome document on environmental, economic and social issues at the heart of the upcoming United Nations Conference on Sustainable Development (Rio+20).

“These last three days are going to be absolutely crucial for diplomats,” the Executive Coordinator of Rio+20, Brice Lalonde, said in an interview. “Delegations are going to be working day and night, dividing themselves into splintered groups to work more thoroughly on each issue, which is something that they have accepted to do only for the last few days.”

The talks are the third and final session of Rio+20’s Preparatory Committee, which will continue deliberations until Friday. The Committee’s various groups will discuss issues such as the management of water, education, health, sustainable transport, desertification and climate change, among others.

More than 100 heads of State and government, along with thousands of parliamentarians, mayors, UN officials, Chief Executive Officers and civil society leaders are expected to attend Rio+20, from 20 to 22 June, to shape new policies to promote prosperity, reduce poverty and advance social equity and environmental protection.

Mr. Lalonde stressed that the groups will help accelerate negotiations on the outcome document – but warned that this may make it harder for small delegations with only a few members to follow them.

“This requires a lot of trust to be able to give a kind of mandate to your group to negotiate on your behalf,” he said.

Mr. Lalonde underlined that despite the world’s current economic and political uncertainties, countries need to think in the long-term when negotiating the agreement, as it will be a blueprint for generations to come.

“We are living in a very difficult crisis, but this conference is about thinking of the next 20-30 years and not only the crisis,” he said. “We need to reach a point by which all countries agree to discuss means of implementation to help developing countries follow a sustainable development path even though these entail costs.”

During the opening of the Preparatory Committee’s session, the Secretary-General of Rio+20, Sha Zukang, urged countries to seize the moment to achieve progress on negotiations.

“We need to look at the big picture,” Mr. Sha told the Preparatory Committee members. “The whole world is watching and we simply cannot falter.”

Mr. Sha emphasized that the document must reflect the importance of the role of non-governmental organizations and private enterprises in achieving sustainable development, as well as the importance of transferring technology and providing capacity building for developing countries so they can shift towards a green economy.

“Governments bear responsibility, but they cannot do it alone,” Mr. Sha said.

The previous round of Rio+20 preparatory talks – focussed on the gathering’s outcome document – ended in New York in early June, with agreement reached on more than 20 per cent of the document, with many additional paragraphs close to agreement.

Secretary-General Ban Ki-moon has said that there is still much work ahead, but foundations are in place for agreement on the remainder of the negotiating text that is expected to become the outcome of the conference.

“I expect the negotiators to accomplish this in the days before ministers and world leaders arrive in Rio. Leaders will then act to resolve all outstanding issues,” he said in a press conference last week. “Their job is to achieve renewed political commitment for sustainable development. We aspire to nothing less than a global movement for generational change.” 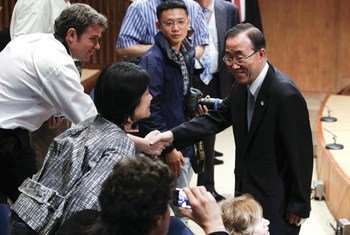