UN Photo/David Manyua (file)
Smoke drifts into the sky from buildings and houses hit by shelling in Homs, Syria (June 2012).

12 June 2012
Following repeated efforts, UN observers were unable to reach the Syrian town of al-Haffeh today as angry crowds surrounded their vehicles, stopping them from proceeding any further, after which they were shot at as they departed.

“The crowd, who appeared to be residents of the area, hurled stones and metal rods at the UN vehicles. The UN observers turned back,” the spokesperson for the UN Supervision Mission in Syria (UNSMIS), Sausan Ghosheh, said today.

“As they were leaving the area, three vehicles heading towards Idlib were fired upon – the source of fire is still unclear,” she added in a statement, noting that the observers had returned safely to their bases.

UNSMIS staff members have been trying to reach al-Haffeh since 7 June, but have been impeded by the ongoing violence in the area. The city is reportedly besieged, with heavy fighting going on.

“UNSMIS calls on the parties to grant the UN observers immediate and unfettered access to conflict zones,” Ms. Ghosheh said.

On Monday, UNSMIS observers reported heavy fighting in Rastan and Talbiseh, north of the city of Homs, with the use of artillery and mortar shelling, as well as firing from helicopters, machine guns and smaller arms.

UNSMIS observers have been charged with monitoring the cessation of violence in Syria, as well as monitoring and supporting the full implementation of a six-point peace plan put forward by the Joint Special Envoy of the United Nations and the Arab League for the Syrian Crisis, Kofi Annan.

Speaking with journalists in Geneva today, the Joint Special Envoy’s spokesperson addressed questions on the formation of an international contact group on Syria by Mr. Annan.

“The objective of creating this group is to give teeth to the [six-point peace] plan… to convince the parties to implement the plan in its entirety. It is not to create a new plan, because, as we have said before, this is the only plan on the table at the moment,” the spokesperson, Ahmad Fawzi, said.

“What is lacking is implementation and that is why we count on these Member States with influence on the parties – during this meeting, and as a result of this meeting – to put irrevocable pressure on the parties to implement the plan and stop the killing and begin a political transition,” he added.

Mr. Fawzi said that Joint Special Envoy Annan is encouraged by signs that Member States are taking the idea of a contact group “very seriously.”

“We hope that this contact group meeting will take place soon, but a venue, and a time, and a list of participants is yet to come together,” he stated. “It’s coming together.”

In a statement issued on Monday night, Secretary-General Ban Ki-moon’s spokesperson said that the UN chief “reiterates his call for all countries with influence on either side to convince them to put the welfare of Syrians first, to pull back from the brink and to reflect on the devastating consequences that increasing violence is having for the people of Syria, the country and the region.”

The spokesperson added that Mr. Ban remains ready to work with the entire international community to assist the sides to achieve a political solution to the crisis.

In a statement issued later on Tuesday, the spokesperson for the President of the General Assembly, Nassir Abdulaziz Al-Nasser, said he remains deeply concerned about the continued killings, reported massacres and violence in Syria, especially in Houla, Mazraat al-Qubeir and in al-Haffe.

“The President of the General Assembly calls on the Syrian authorities and all other parties to grant safe and unhindered access to the UNSMIS, and also to all UN humanitarian and human rights personnel who are working to assist the affected communities, in accordance with international law and commitments made in this regard,” Mr. Al-Nasser’s spokesperson said.

The spokesperson added that Mr. Al-Nasser reiterates his call on all parties of the Syrian crisis, especially the Government, to cease all military operations and violent attacks immediately, and protect its civilians in accordance with its legal responsibilities. 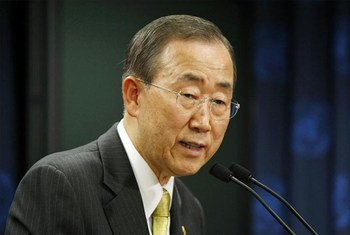 11 June 2012
Secretary-General Ban Ki-moon is deeply concerned over an increase in the level of violence in Syria and calls for an immediate end to the fighting there, his spokesperson said today.