6 June 2012
The United Nations environment agency today warned that the world “continues to speed down” an unsustainable path in spite of hundreds of internationally agreed goals to protect the planet, and stressed that drastic actions and big-scale measures are needed to reverse this pattern.

“If current trends continue, if current patterns of production and consumption of natural resources prevail and cannot be reversed and ‘decoupled,’ then governments will preside over unprecedented levels of damage and degradation,” said the Executive Director of the UN Environment Programme (UNEP), Achim Steiner.

The fifth edition of the Global Environmental Outlook (GEO-5), launched ahead of the UN Conference on Sustainable Development (Rio+20) in Brazil later this month, assessed 90 of the most important environmental goals and objectives and found that significant progress had only been made in four.

The four goals entail eliminating the production and use of substances that deplete the ozone layer, the removal of lead from fuel, increasing access to improved water supplies, and boosting research to reduce pollution of the marine environment

According to the assessment, while some progress was shown in 40 goals, including efforts to reduce deforestation, little or no progress was detected for 24 of them, including climate change, desertification and drought. In addition, there were eight goals which showed no progress and instead further deterioration, such as the state of the world’s coral reefs.

The assessment emphasizes that countries can still meet sustainability targets if current policies are changes and strengthened and provides examples of successful policy initiatives to this end.

GEO 5, which was produced over a period of three years and with the collaboration of over 600 environment experts, also highlights that when international treaties and agreements have tackled goals with specific, measurable targets they have demonstrated considerable success.

“GEO-5 reminds world leaders and nations meeting at Rio+20 why a decisive and defining transition towards a low-carbon, resource-efficient, job-generating green economy is urgently needed,” said Mr. Steiner. “The scientific evidence, built over decades, is overwhelming and leaves little room for doubt.”

“The moment has come to put away the paralysis of indecision, acknowledge the facts and face up to the common humanity that unites all peoples,” he added. “Rio+20 is a moment to turn sustainable development from aspiration and patchy implementation into a genuine path to progress and prosperity for this and the next generations to come.”

More than 100 heads of State and government, along with thousands of parliamentarians, mayors, UN officials, Chief Executive Officers and civil society leaders are expected to attend Rio+20 to shape new policies to promote prosperity, reduce poverty and advance social equity and environmental protection. 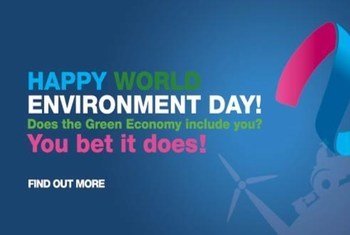 5 June 2012
Marking World Environment Day, United Nations officials today highlighted the need for a change in thinking and approach to ensure the sustainability of the Earth’s resources as the world population grows.