Ahead of a major conference on sustainable development, Secretary-General Ban Ki-moon today called on people around the world to cast their votes in an online global poll on solutions to the planet’s most pressing social, economic and environmental challenges.

"Go to vote.riodialogues.org. Tell us what you think. Those votes – the voices of the people – can make a difference in building a prosperous, equitable, stable and sustainable world for all," Mr. Ban said in a message to launch the Rio +20 Dialogues: Vote for the Future We Want online platform.

The results of the poll will be presented to the more than 100 world leaders attending the high level roundtable meetings, taking place on 20-22 June, at the United Nations Sustainable Development Conference (Rio+20) in Rio de Janeiro, Brazil, later this month.

"The dialogues are an attempt to create a bridge between civil society and the official proceedings of the upcoming UN Conference on Sustainable Development," Mr. Ban said.

The global poll is part of a social networking initiative of the Government of Brazil, supported by the United Nations.

Participants included activists, human rights advocates, community leaders, civil society members, economists and urban planners. The discussions led to some 100 policy proposals, which are the ones that the public can vote on at vote.riodialogues.org.

Some of the recommendations include putting a price on carbon emissions, setting up a global network of international marine protected areas, and adjusting Gross Domestic Product for environmental damage.

Available in Arabic, Chinese, English, French, Portuguese, Russian and Spanish, the voting for the online global poll will close on 15 June. 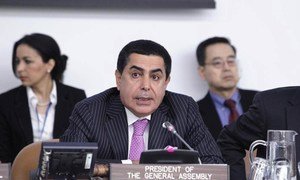 United Nations top officials today stressed the need to achieve concrete commitments ahead of the Sustainable Development Conference (Rio+20) in Brazil, and called on countries to make progress in the last round of negotiations before the Conference starts next month.