UN Photo/Evan Schneider
A wide view of the 2nd Meeting of the Advisory Board of the UN Centre for Counter-Terrorism (UNCCT), attended by Secretary-General Ban Ki-moon, in Jeddah, Saudi Arabia.
4 June 2012

The spokesperson added that at their meeting in the city of Jeddah, the Secretary-General also thanked the King for his country’s support for the United Nations, in particular most recently for the UN Centre for Counter Terrorism (UNCCT).

Mr. Ban arrived in Saudi Arabia on Saturday, and attended the second meeting of the UNCCT’s Advisory Board the following day. The UNCCT was created in September 2010, with the support of the Government of Saudi Arabia, and seeks to support the implementation of the UN Global Counter-Terrorism Strategy, which was adopted by the General Assembly in 2006.

While in Jeddah, the UN chief also met with other senior Saudi officials.

In a meeting with the Minister of Petroleum and Mineral Resources, Ali bin Ibrahim Al-Naimi, the topics of Sustainable Energy for All initiative, the UN Conference on Sustainable Development (Rio+20) and Saudi Arabia's energy strategy were discussed.

Mr. Ban also met with the Secretary-General of the King Abdullah International Centre for Interreligious and Intercultural Dialogue, Faisal Al-Muammar; and he visited the Islamic Development Bank, where he met its Acting President, Birama Sidibe. 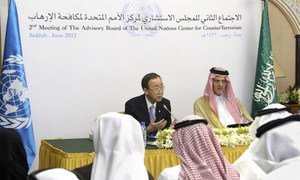