1 June 2012
The United Nations Human Rights Council today called for “a special inquiry” into the massacre in the Syrian village of Houla last weekend, which resulted in the killings of 108 people, including 49 children.

After a Special Session in Geneva on Friday afternoon, focussed on the deteriorating human rights situation in Syria and the killings in Houla, the Council adopted a resolution – with 41 votes in favour, three against and two abstentions – condemning in the strongest terms the use of force against civilians.

The meeting is the Council’s fourth special session on Syria since the crisis in the Middle Eastern country began some 15 months ago. The UN estimates that more than 9,000 people, mostly civilians, have been killed in Syria and tens of thousands displaced since the uprising against President Bashar al-Assad began.

In the resolution, Council members deplored the “outrageous killings” in Houla and emphasized the continued failure of the Syrian authorities to protect and promote the rights of all Syrians.

The Council called for International Commission of Inquiry on Syria – a UN independent panel probing abuses in the Middle Eastern country – to conduct a “transparent, independent and prompt investigation into violations of international law with a view to hold to account those responsible for widespread, systematic and gross human rights violations, including violations that may amount to crimes against humanity.”

In addition, the Council asked the Commission of Inquiry to publicly identify, if possible, those responsible for the atrocities and to submit a report on the results of its investigation at its next session, which will be held from 18 June to 6 July.

The Commission of Inquiry was established at the Council’s second Special Session and it presented its first report on 28 November last year, concluding that the substantial body of evidence it had gathered indicated that gross violations of human rights had been committed by Syrian military and security forces since the beginning of the protests in March 2011.

In its update, based on interviews, to the Council in May, the Commission of Inquiry said that the Syrian Government has so far not provided it with access to the country. It noted that gross human rights violations continue unabated, amid increasing militarization of the strife there, despite an earlier agreement by parties to the conflict to halt hostilities.

In addition, it said that most of the serious violations were committed by the Syrian army and security services as part of military or search operations in locations thought to host defectors or armed people, and those seen as supporters of anti-government armed groups. It also noted that it had received several reports stating that anti-government armed groups were committing human rights abuses. 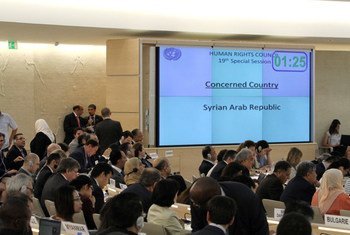 1 June 2012
The United Nations human rights chief today called on the international community to make all efforts to end impunity in Syria for all perpetrators of atrocities that have occurred there, and warned that without immediate investigations the situation would descend into a full-fledged conflict putting the whole region in grave danger.